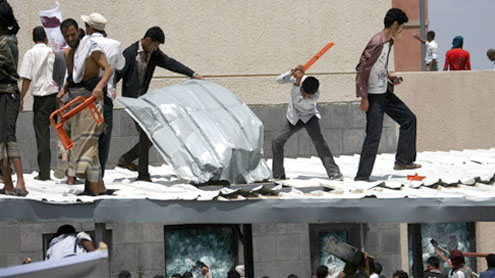 Yemen: A member of the team investigating an attack on the U.S. Embassy in Yemen was killed Thursday, Yemeni officials said.

“Motorcycle attacks are currently al Qaeda’s main tactic,” a senior Interior Ministry official said, adding that such attacks “are easier for terrorists to coordinate and plan for.”The attack took place along Siteen, a main street in the Yemeni capital of Sanaa, which is generally considered one of the safest, officials said. The Yemeni president’s house is on the same road.

Aqlan’s death “sends a message that if you’re working with the Americans you’ll be targeted no matter who you are,” the official said.Hundreds of protesters gathered in front of the embassy in September to protest the video “Innocence of Muslims,” which maligns the Prophet Mohammed. The demonstration turned violent, and some protesters broke into the embassy.Clashes between security forces and demonstrators left at least four protesters dead and more than 30 people injured. – CNN