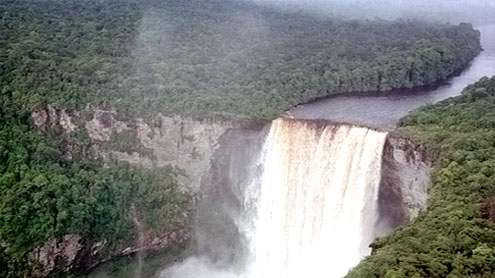 Kaieteur Falls fall over a series of steep cascade and covers the total distance of 251 meters (822 feet) from top to bottom. As Kaieteur Falls is the combination of both height and water volume, it makes it the 26th most scenic waterfall in the world.Kaieteur Falls is not as famous as Niagara Falls but is twice as thicker and denser as Niagara Falls. It was named after Chief Kai of the Patamona Tribe andthe legend tells us that Chief Kai sacrificed himself by canoeing over the Kaieteur Falls to please the Great SpiritMakonaima.

He thought by doing this he will save his tribefrom the savage Caribs who were raiding the area. And indeed his sacrifice was paid off, as the direct descendants of chief Kai still live near the border of Kaieteur National Park.But as far as other people are concerned, there are no signs of civilization around the waterfall except for a few buildings and a tiny strip of shops.

One of the powerful waterfalls of the world, Kaieteur Falls is a great source of tourist attraction. But because Guyana is a small country in South America, not many people are aware of it which makes it a must visit place for people who love adventure trips.The oldest layer of rock on earth’s surface is found in Guyana which is 2.99 billion years old. Kaieteur Falls is also known for its exotic beauty and Kaieteur creatures. One of the creatures found there is known asKaieteur Swifts, a type of bird who builds its nest behind Kaieteur Falls and also capable of capturing flying insects.

To make bird watching varied and interesting, Kaieteur National Park which is also one of the oldest parksis located on the Guiana Shield in Kaieteur. Many endangered species are seen in Kaieteur National Park. The park is designed in a way that it makes the view more interesting and informative for the tourists. Other creatures found in the park are the tiny golden frog and rare bush dog. Golden frog is a type of plant that attracts and digests insects but still there are many other animals found in the forests who feed on insects. – Aqsa Jaffri