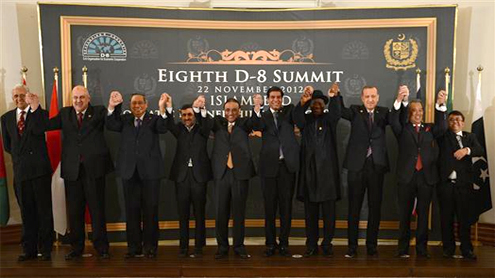 ISLAMABAD: President Asif Ali Zardari emphasizing the need for better cooperation among the members of the D-8 called upon them to work sincerely for finding the development solutions for their one billion people with focus on encouraging the free flow of goods, free flow of peoples and free flow of finances.

Addressing the inaugural session of 8th summit of the D-8 countries here at Aiwan-e-Sadr, on the theme of “Democratic Partnership for Peace and Prosperity” after assuming chairmanship of the organization from Nigerian President, the President said presence of the heads of state and government of D-8 countries today reflects collective determination to use this platform for finding solutions.President Zardari said people of Pakistan stand with their brothers and sisters across the D-8 world in pursuit of democracy, peace and prosperity.

Zardari put forward several proposals for fostering economic cooperation among member countries. He emphasized the need for Trade and Development Banks; encouraging private sector, facilitating contacts between chambers of commerce and investment houses of the member countries; simplification of visa and customs procedures and barter trade.The President said, “We must grow our economies, and provide our people with jobs and security.” He said the D-8 has the potential to advance this agenda.He expressed the hope that the initiatives being declared at this Summit will make a difference.

About the D-8 Charter, signed today, the President said it will cement the joint undertakings. He said the D-8 Global Vision will be a giant step forward towards achieving long term objectives and the Islamabad Declaration will build upon the roadmap.He urged the members of the D-8 to endorse once again the core values of D-8; that include peace, dialogue and cooperation, justice, equality and moderation, democracy, rule of law and harmony, and peaceful co-existence and inclusion.He said most of D-8 countries have already ratified the PTA and there is need to operationalize it without delay.

The President said D-8 countries represent a huge untapped reservoir that can serve as a catalyst for peace and prosperity around  the world.He said, “Our people want peace within the country and peace with our neighbours.”He said Pakistan is making unprecedented efforts to normalize relations with India and supports Afghanistan’s own roadmap for peace and reconciliation.  This is the vision of a democratic people that seek peace and prosperity, he added.The President said one of the most serious threats facing Pakistan is international terrorism adding that terrorists, both from within Pakistan, and from abroad, seek to impose their agenda.

“We cannot and will not allow Islam to be hijacked and will fight for our values and will fight for the spirit of our great religion that our Holy Prophet (Peace be upon him) gave to use,” he added.President Zardari said, “We are fighting the terrorists’ dark and destructive vision every day. Our soldiers, policemen and political workers serve on the front lines of this fight.”He thanked the outgoing Chairman of D-8, President of Nigeria for his leadership of the Organization during the last 2 years.He said today, the D-8 is not just eight developing countries but all the eight countries have democracy.

He said, “We always shared common bonds of religion and culture. We are also bound, by the will and spirit of our people.”He said the leaders of the D-8 democracies are answerable to one billion people of the region and owe them a journey towards a better future.Giving the example of democratic process in Pakistan, the President said five years ago, his country began a dream and a new democratic journey.“Our mission was to achieve a better future for our people and a future of better lives, with dignity, with freedom, with rule of law,” he added.

He said the presence of the leaders of the D-8 is a measure of solidarity with Pakistan adding “it gives us strength and hardens our resolve.He hoped that the D-8 Summit in Islamabad will open new chapters of cooperation and understanding among the member states.  Referring to Pak-Turkey relations, the President said Pakistan’s deep commitment to and friendship with brothers and sisters in Turkey is no secret.He said Turkish leadership, on economic issues in particular, has been exceptional and thanked Turkey for its support and commitment.

Commenting on Pak-Iran relations, the President said  with Iran Pakistan’s destiny is inter-linked. “We are neighbors and are located in the same region,” he added.The President said, “We have worked closely with our brothers and sisters in Iran and will continue to support peaceful ways to help resolve disagreements between Iran and other parties.”He said Indonesia has a long and glowing record of standing by Pakistan in its hours of need across many decades.The President said today, Indonesia helps light path by demonstrating how to negotiate the challenges of growing an economy, while maintaining peace in a diverse society.

“Democracy and the struggle against oppression is something we also share with our brothers and sisters in Egypt,” said the President.He said, “We were amazed as, last year, Egyptians took to Tahrir Square to build an Egypt of their choice.”  He saluted the heroism of the Egyptian youth and assured full support from Pakistan.Congratulating President Morsi of Egypt, the President said “We wanted him to be here today. We are proud of the leadership he has shown. We understand the reason for his absence.”He said Pakistan knew about the mortal threat being faced by Nigeria at the hands of Boko Harma extremist group and expressed solidarity with them.

He said Al-Qaeda affiliates in Pakistan, like the TTP, pose serious threats to  aspirations for the future and to very identity.  He said, “I commend President Goodluck’s leadership in a time of great complexity. We hope our countries grow closer as a result of this visit.”President Zardari said Malaysia is a model of how diversity and discipline can drive a nation’s economy.The President said together, the D-8 countries represent eight very important nations and individually, they represent countries with whom relationship goes far beyond the ordinary. He said for Pakistan the D-8 represents a partnership that can help cement these bonds.

Commenting on the present Palestine situation, the President said the people of Palestine continue to suffer the Israeli aggression.President Zardari said, “We condemn the recent attacks in Gaza which have led to the loss of innocent lives. The people of Kashmir continue to suffer unjust occupation.” He said for decades they have been awaiting the promised self-determination adding “We must address these issues rather than blaming others, we need to take charge of our destinies.”

He said D-8 Business Forum, meetings of heads of central banks, trade promotion organizations and trade exhibitions are very important initiatives to help in economic growth.He said there is need to encourage the private sector in trade and development banking among the D-8 countries.He said there is need to facilitate contacts between chambers of commerce and investment houses.The President said, “We also need to encourage interactions between our parliaments, scholars, students, judges, artists, media and civil society organizations and for this purpose there is need to simplify visa and customs procedures.”

He said most the members have ratified the PTA and there is need that others should ratify it and it should be made operational.The President said Pakistan was achieved through democratic struggle led by Quaid-e-Azam Muhammad Ali Jinnah and adding “democracy is in our veins.”He said when his wife and leader of Pakistan, Shaheed Mohtarma Benazir Bhutto was assassinated by terrorists in December 2007, this country came together to mourn, and to rebuild and that commitment continues to this day.

Referring to huge untapped reservoir of D-8, the President said reservoir can serve as a catalyst for peace and prosperity around the world.He said the best way to harness collective potential is to put trust in the people of the region.He said “Our people want peace within the country and peace with our neighbors.” He said the government is making unprecedented efforts to normalize relations with India.

“We support Afghanistan’s own roadmap for peace and reconciliation,” he added.The President said this is the vision of a democratic people that seek peace and prosperity.He said, “As we build the Pakistan of our Shaheed Leader, Mohtarma Benazir Bhutto – a democratic, prosperous, peaceful Pakistan – we are proud to host this historic summit.”He said from food security to climate change to demographic pressures, people are facing many challenges. – APP