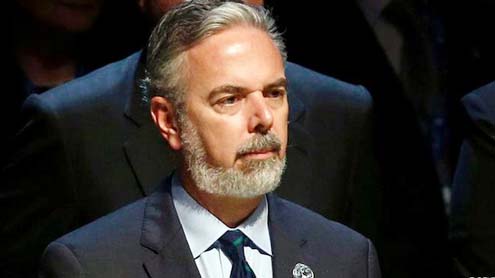 Brazilian Foreign Minister Antonio Patriota has resigned in the wake of a diplomatic scandal with Bolivia.

He quit after a Bolivian opposition politician holed up in the Brazilian embassy in La Paz for more than a year fled the country in a diplomatic car.A Brazilian official has admitted using his diplomatic immunity to drive the senator across the border without permission from either country.Senator Roger Pinto was given asylum at the Brazilian embassy last year.He had been accused of at least 14 crimes in Bolivia, including corruption. He denied the charges and asked for asylum saying he was being persecuted.

Mr Patriota’s resignation was announced in a brief statement from the office of President Dilma Rousseff on Monday.The same statement named Luiz Alberto Figueiredo, Brazil’s head of mission at the UN, as the new foreign minister. Mr Patriota is to become Brazil’s new UN ambassador, officials said.The BBC’s Julia Carneiro in Brazil says Mr Patriota’s resignation came after a day of diplomatic tension with Bolivia.Brazilian diplomat Eduardo Saboia said he used his diplomatic immunity to get Mr Pinto out of Bolivia, leaving with him in an official vehicle on Friday, she says.

Mr Saboia said Mr Pinto had been suffering from depression and he had taken a personal decision to help him.The senator had been living in a small room in the Brazilian embassy for the past 450 days.After the escape was revealed, Bolivia accused Brazil of violating international agreements and demanded an explanation.According to Brazilian media, President Rousseff’s government did not know of the operation and considered it a “disaster”.Mr Pinto, who arrived in Brasilia on Sunday, says the charges against him are politically motivated and have been fabricated by the Bolivian government. – BBC

What are the Common Core State Standards?