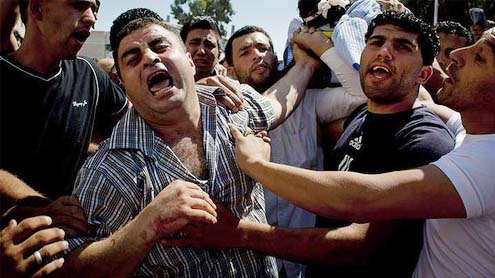 “The meeting that was to take place in Jericho … today (Monday) was cancelled because of the Israeli crime committed in Qalandiya today,” the official said, referring to the refugee camp where the clashes erupted before dawn.He did not set a new date.

“What happened today in Qalandiya shows the real intentions of the Israeli government,” Palestinian President Mahmoud Abbas’s spokesman Nabil Abu Rudeina, said as reports of the shooting started to emerge. He called on the US administration to “take serious and quick steps” to prevent the collapse of peace efforts.

Medics reported three Palestinians shot dead and 19 wounded by Israeli security forces in Qalandiya camp, between Ramallah and Israeli-occupied east Jerusalem, very early on Monday. They named the dead as Rubeen Abed Fares, 30, and Yunis Jahjouh, 22, both shot in the chest, and Jihad Aslan, 20, who died of brain damage.The hospital officials said all the casualties had been hit by live ammunition.

Egypt’s Foreign Minister Nabil Fahmi, on a visit to Palestinian President Mahmoud Abbas’s headquarters in Ramallah, condemned the deaths. “We condemn the occupation forces’ killing of three people from Qalandia refugee camp,” Fahmi said at a news conference.“The continuation of violence and settlement expansion decreases the chances of success for negotiations, which we hope will succeed,” he added.The talks have been overshadowed by Israeli plans to build more than 2,000 new homes for Jewish settlers on occupied Palestinian territory.

On Sunday, Jerusalem city council’s finance committee approved a budget of $17.3 million for infrastructure work at the site of the planned new east Jerusalem settlement of Ramat Shlomo. The site hit the headlines in March 2010, when Israel sparked the ire of the US administration by announcing, during a visit by Vice-President Joe Biden, that 1,600 new homes would be built there. “The daily killings and ongoing settlement activity are all Israeli messages that aim to destroy the peace process,” Abu Rudeina said. – KhaleejNews