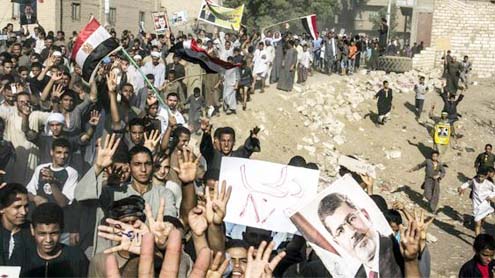 CAIRO: Egyptian security forces stormed a town controlled by supporters of ousted President Mohamed Mursi on Monday and arrested 56 residents as part of a crackdown on his Muslim Brotherhood, officials said.

The forces entered the town of Delga, in Minya province about 300 km (190 miles) south of Cairo, early on Monday, clearing barricades that had been erected by the Mursi supporters, security officials said.Gunshots were exchanged but there were no official reports of injuries.Delga has been under Islamist control since the army overthrew Mursi on July 3, leading to clashes with the security forces that killed about 70 people in Minya province on that day alone.

Monday’s raid was launched to wrest back control of the area and arrest people who had been accused of inciting violence.“The residents put up some resistance during the house raids,” Muslim Brotherhood activist Yehya Shaker told Reuters by telephone.They threw bricks at the police and set ablaze car tires, and the security forces responded by firing bird-shot and tear gas, he said.

The Interior Ministry said 56 people were arrested and seven guns confiscated.Security forces have killed hundreds of Brotherhood supporters and arrested thousands, including Mursi and other leaders, in a crackdown since the army toppled him in July 3 following mass protests against his rule.Many were killed when the security forces attacked pro-Mursi protest camps in Cairo on Aug. 14.The Islamists had torched about 20 churches and homes in Delga in August and spray-painted X marks on shops owned by Christians. – ArabNews