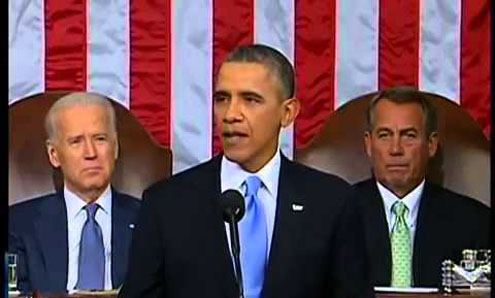 The East-West split re-opened by the crisis in Ukraine hardened Wednesday when President Barack Obama threw Washington´s weight firmly behind Ukraine in its stand-off with Moscow. Obama welcomed Kiev´s interim premier Arseniy Yatsenyuk to the White House and stood by his side as both leaders sternly warned Russia that Ukraine would not surrender its sovereignty. Obama repeated that Moscow would face unspecified “costs” if Russian President Vladimir Putin does not back down, and rejected a bid to hold what he called a “slapdash” referendum in Crimea. “There´s another path available and we hope President Putin is willing to seize that path,” Obama told White House reporters, sitting alongside Yatsenyuk after their talks the Oval Office.”

But if he does not, I´m very confident that the international community will stand firmly behind the Ukrainian government. “Yatsenyuk thanked Washington for its support and declared: “We fight for our freedom. We fight for our independence. We fight for our sovereignty. And we will never surrender. “Breakaway leaders on Ukraine´s Crimean Peninsula, backed by Putin, plan to hold a referendum on Sunday to split from Kiev and come under Moscow´s wing. Russian troops backed by ad hoc local militias secured the territory in the chaotic days last month after Ukraine´s former pro-Kremlin leader Viktor Yanukovych was overthrown by a street revolt.Obama said he hopes the crisis can be resolved through diplomacy, but Ukraine and the West do not recognize the referendum and Moscow does not recognize the Kiev government.

“We have been very clear that we consider the Russian incursion into Crimea outside of its bases to be a violation of international law,” Obama said, underlining the depth of the divide. “And we have been very firm in saying that we will stand with Ukraine and the Ukrainian people in ensuring that that territorial integrity and sovereignty is maintained. “Yatsenyuk said he was “ready and open” for talks with Russia, but warned: “We want to be very clear that Ukraine is and will be a part of the Western world. “During his trip to Washington, Yatsenyuk also plans to try to iron out details of a $35 billion (25-billion-euro) aid package he says his nation´s teetering economy needs to stay afloat over the coming two years.  Thenews