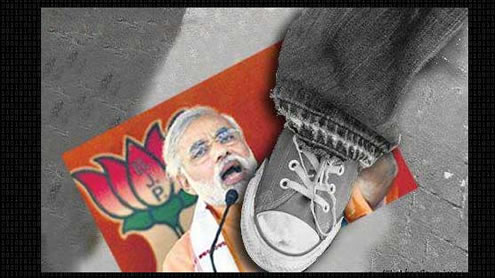 The defaced page added a number of messages based on anti-India rhetoric mostly targeting India’s conservative politics and army.
The rhetoric posted on the defaced website is full of abusive slangs, warning Indian hackers to “back off”.

It also targeted Indian media and Bollywood culture for misleading Indian public for the purpose of ratings. It goes on to point out Indian media’s bias and sensationalism against Pakistan.

The message criticizes BJP candidate Modi heavily for his controversial role in Gujrat riots that led to killing of over 2000 Muslims and a conflict between Hindu and Muslim populace.

The message for Modi on the hacked website tells Modi not to exploit Muslim vote bank saying Modi is not worthy enough to even talk to Muslims. This isn’t the first time a Pakistani hacking group has targeted an Indian high profile website. A digital phenomenon referred to as Cyber Warfare is going on between Indian and Pakistani hackers for over a decade. Both sides have hacked high profile websites of the opponents in the past.

Army to take Over Security of Polio teams