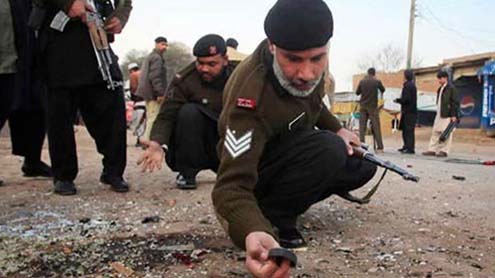 A series of explosions took place early Friday in the weapons depot of the Frontier Corps’ Khyber Rifles in the Khyber tribal region. The depot is located in a fort in Khyber’s Landi Kotal area and the explosions took place there at about 1 am and later at 4 am. Area residents heard the several explosions with some locals saying that they had seen flames rising high from the fort. The depot was completely burnt as a result with the fire still raging through the fort at the time of the filing of this report.

No casualties have so far been reported. There appears to confusion regarding the nature of the attack with some security sources saying that the incident was an attack launched by unknown militants and others attributing it to have been caused by an electric short circuit. The incident came a day after the banned Tehreek-i-Taliban Pakistan (TTP) refused to extend the ceasefire that had lasted for 40 days. No militant group has claimed responsibility for the incident so far which might have been an attack.