94 Dead In Triple Baghdad Car Bombings Claimed By IS 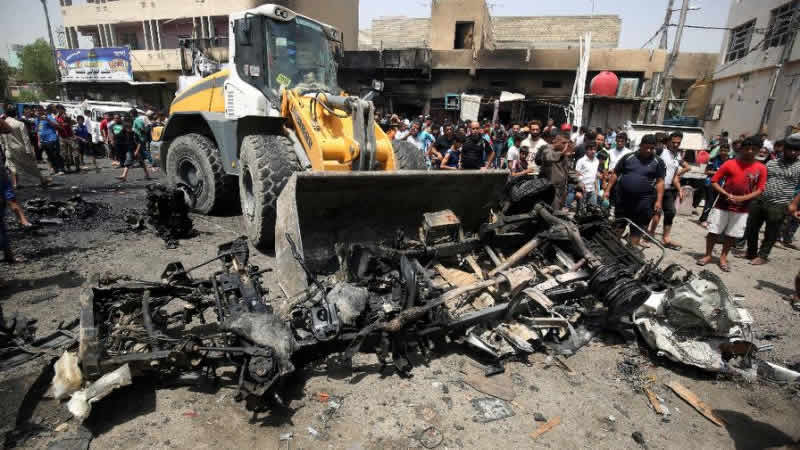 94 dead in triple Baghdad car bombings claimed by IS

Three car bombs in Baghdad, including a huge blast at a market in a Shiite area, killed at least 94 people Wednesday, the bloodiest day in the Iraqi capital this year.

The attacks, all claimed by the Islamic State group, came with the government locked in a political crisis that some have warned could undermine the fight against the jihadists.

The worst bombing struck the frequently targeted Sadr City area of northern Baghdad at about 10:00 am (0700 GMT), killing at least 64 people, officials said. The blast set nearby shops on fire and left debris including the charred, twisted remains of a vehicle in the street. Dozens of angry people gathered at the scene of the bombing, blaming the government for the carnage. The state is in a conflict over (government positions) and the people are the victims,” said a man named Abu Ali. “The politicians are behind the explosion.” Abu Muntadhar echoed his anger. The state is responsible for the bombings that hit civilians,” the local resident said.

The politicians “should all get out”. Cleric Moqtada al-Sadr, who spearheaded a protest movement demanding a cabinet reshuffle and other reforms, has a huge following in the working-class neighbourhood of Sadr City, which was named after his father. Another suicide car bomb attack killed at least 17 people at the entrance of the northwestern neighbourhood of Kadhimiya, which is home to an important Shiite Muslim shrine. Access to the neighbourhood, which has also been repeatedly targeted over the years, is heavily controlled. Several members of the security forces were among the victims, hospital sources said. In the Jamea district in western Baghdad, another car bomb went off in the afternoon, killing at least 13 people, an interior ministry official and medics told AFP.

A total of around 150 people were wounded in the three bombings. IS issued an online statement claiming responsibility for all three attacks. It said they were carried out by suicide bombers, for whom they each provided a nom de guerre. The UN s top envoy in Iraq, Jan Kubis, condemned the bloodshed. These are cowardly terrorist attacks on civilians who have done nothing but going about their normal daily lives,” he said. IS, which overran large areas in 2014, considers Shiites, who make up the majority of Iraq s population, to be heretics and often targets them with bombings. Government spokesman Saad al-Hadithi went on state television hours after the Sadr City bombing and said that IS now only controls 14 percent of Iraq, down from 40 percent. But the jihadists have retained their ability to strike in the heart of Baghdad and other government-held areas with bomb attacks.

The months-old political crisis has led to repeated mass demonstrations that required a huge security deployment and hampered government action at a time when Iraq is still battling jihadists on several fronts. Security forces are currently engaged in large-scale military operations in the provinces of Anbar and Nineveh as they close in on Fallujah and Mosul, IS s two major remaining hubs in Iraq. The United States and the United Nations have warned the political impasse could undermine the fight against IS. Prime Minister Haider al-Abadi has sought to replace the cabinet of party-affiliated ministers with a government of technocrats, a move opposed by powerful parties that rely on control of ministries for patronage and funds.

Angry demonstrators last month broke into central Baghdad s fortified Green Zone and stormed parliament after lawmakers again failed to approve new ministers. While the protesters withdrew the following day, parliament has still yet to hold another session. Zainab al-Tai, a lawmaker from Sadr s political movement, said the most recent efforts to resume the parliamentary process were still floundering Wednesday. Some disagreements remain, there is no session and we have yet to set a date for the next session,” she told AFP. Parliament is divided in three groups… I don t think we can reach a result, the decision will be in the hands of the people,” she added.