by aneel
in Asia
1 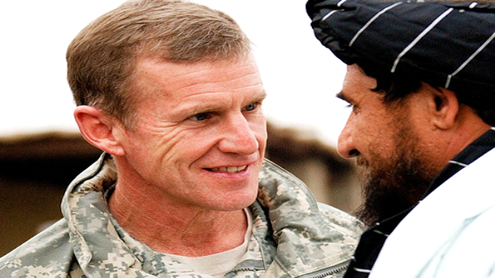 WASHINGTON: The former commander of allied forces in Afghanistan, retired General Stanley McChrystal, has claimed the US held a ”frighteningly simplistic” view of the country when it declared war on the Taliban in 2001, and a decade later lacks the necessary know-how to bring the conflict to a satisfactory end.

He estimated that the US and its NATO allies were barely half-way to achieving their mission goals, adding that establishing a government in which Afghans retained confidence and which could stand up to the Taliban remained the biggest challenge.

The former army chief, who was relieved of his command last year after his staff were exposed in a magazine article making derogatory comments about Obama administration officials, made his remarks to the Council on Foreign Relations, which were reported by Associated Press.
Advertisement: Story continues below

”We didn’t know enough and we still don’t know enough,” Mr McChrystal reportedly said. ”Most of us, me included, had a very superficial understanding of the situation and history, and we had a frighteningly simplistic view of recent history, the last 50 years.”

He said that US forces did not know the country’s languages and did not make ”an effective effort” to learn them, according to AP.

Mr McChrystal also acknowledged that the US invasion of Iraq two years later had complicated the Afghanistan mission because it ”changed the Muslim world’s view of America’s effort”.

”When we went after the Taliban in Afghanistan in 2001, there was a certain understanding that we had the ability and the right to defend ourselves,” he said.

The fact that al-Qaeda was being protected by the Taliban had added legitimacy to the US mission. But invading Iraq altered that view in the eyes of Muslims.

Operation Enduring Freedom was launched 10 years ago yesterday and was aimed at hunting down Osama bin Laden after the September 11, 2001 attacks on New York and Washington, and eliminating the Taliban.

But the longest conflict in US history continues to drag on, despite the assassination of bin Laden in May and in the face of a resurgent Taliban. The US still has 98,000 troops in Afghanistan but intends on withdrawing 10,000 by Christmas and a further 23,000 – equivalent to the troop surge ordered up by Barack Obama in 2009 – by next northern summer.

With public support for the war having collapsed in the US, the allies plan on handing security responsibilities to local Afghan forces by 2014, although military strategists expect some US presence to remain for years. Marine General John Allen admitted recently: ”We’re going to be here a long time.”