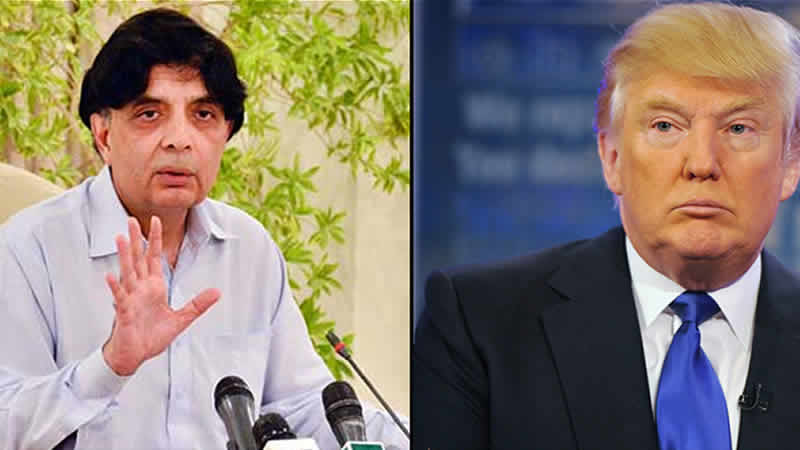 Pakistan angrily criticized Donald Trump, frontrunner for the Republican presidential nomination, for saying he would force the country to free a jailed Pakistani doctor believed to have helped the CIA hunt down al Qaeda leader Osama bin Laden.

Trump, a 69-year-old billionaire real estate developer, told Fox News on Friday that, if elected, he would get Pakistan to free Shakil Afridi “in two minutes”, saying that Islamabad receives a lot of development aid from the United States. Contrary to Mr. Trump’s misconception, Pakistan is not a colony of the United States of America,” Pakistani Interior Minister Chaudhry Nisar said in a statement on Monday. The statement said Afridi’s fate would be decided “by the Pakistani courts and the government of Pakistan and not by Mr. Donald Trump, even if he becomes the president of the United States”.

The statement came on the fifth anniversary of the killing of bin Laden architect of the Sept. 11, 2001 attacks on U.S. cities during a secret raid in the Pakistani town of Abbottabad that damaged relations between the strategic allies. Washington views Afridi as a hero but Pakistan sentenced him in 2012 to 33 years in jail on charges of belonging to militant group Lashkar-e-Islam, which he denies. That sentence was overturned and Afridi is now awaiting trial on another charge. Trump has alarmed U.S. allies with his combative rhetoric and his calls for an “America First” agenda that many see as a threat to retreat from the world. In his comments about Pakistan and Afridi for Fox News, Trump said.

“I would tell them let (him) out and I’m sure they would let (him) out. Because we give a lot of aid to Pakistan.” Afridi has also been accused in Pakistan of running a fake vaccination campaign in which he purportedly collected DNA samples to help the Central Intelligence Agency (CIA) track down bin Laden. He has not been charged over those allegations. After his original conviction was overturned, he was charged in 2013 with murder relating to the death of a patient eight years earlier.

He remains in jail. In the Fox interview Trump also said he supported leaving the roughly 10,000 U.S. troops still based in Afghanistan instead of withdrawing them by the end of 2017. I would stay in Afghanistan,” he said. “It’s probably the one place we should have gone in the Middle East because it’s adjacent and right next to Pakistan which has nuclear weapons.” The United States led the military invasion of Afghanistan in 2001 to oust the Taliban for sheltering bin Laden and other al Qaeda leaders following the Sept. 11 attacks.

Ban On Maalik LHC Issues Notice To Federal Govt, Censor Board For May 17

US Asks Pakistan To Pay For F-16s

US Asks Pakistan To Pay For F-16s