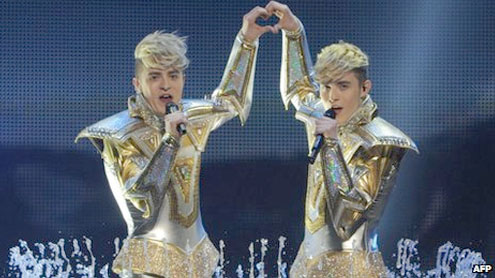 The Irish twins were one of 10 acts to be voted through from Tuesday night’s semi-final.

They will perform on stage in Baku, Azerbaijan, on Saturday to perform their pop track Waterline.The former X Factor contestants, John and Edward Grimes, will go up against favourites the Russian grannies, called Buranovskiye Babushki, who also made it through to the final.

Jedward are representing Ireland for the second year in a row. Last year they finished in eighth place with Lipstick.The 20-year-old twins dressed in silver and gold costumes with their famous spiky hair flattened for the occasion.Their performance ended with the brothers jumping into a fountain in the middle of the stage.

The second semi-final takes place on Thursday night (24 May).France, Italy, Germany, Spain, the UK and last year’s winners Azerbaijan have already qualified for the final along with Romania, Moldova, Iceland, Hungary, Denmark, Albania, Cyprus and Greece.Engelbert Humperdinck is representing the UK with his song Love Will Set You Free.