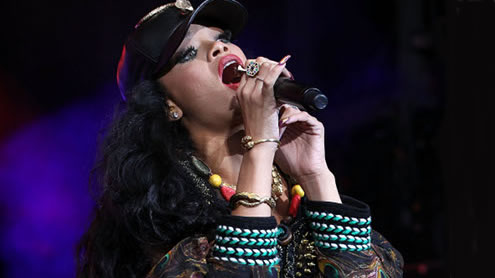 Rihanna reportedly enjoyed a ‘wild night’ with a British rapper while on holiday.

The singer is currently on a break from her busy music career and has been travelling around the Mediterranean on a luxury yacht with a group of friends. Rihanna is said to have invited UK rapping sensation Tinie Tempah to talk about a potential collaboration, but the work discussion soon gave way to a night of partying.

‘Rihanna loves Tinie’s music and is fond of him as a person, too. She’s very keen to work with him at some point, which was discussed at length over dinner,’ a source told British newspaper The Sun. ‘Obviously, eating took up a small part of the night as he joined her crew on yet another wild night. It won’t be one that he will forget in a hurry.’

Tinie joined Rihanna and her pals last Friday after performing at UK festival Global Gathering. On the same day, the Bajan beauty tweeted she was enjoying a traditional Italian liquor and working on new sounds. ‘Limoncello and my new music!!! I’m zoning (sic),’ she wrote.-MSN

Not Quite so Lucky After All ….