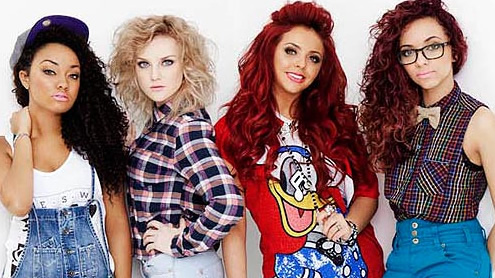 When Leigh-Anne Pinnock was still at school, boys used to pick on her. Now they’re queuing up to marry her. So what’s changed? Just a small thing called Little Mix. Having become the first group to win The X Factor, the four girls have seen their popularity with the lads soar. It’s one aspect of the job which has come as a surprise. Leigh-Anne, 19, from High Wycombe, Bucks, says: “I’ve had guys on Twitter asking to marry me. I said ‘Yes’ to one of them but didn’t hear from him again.

“At school the boys used to pick on me. I know everyone says that means they fancy you, but it didn’t feel like that at the time.” Bandmate Jade Thirlwall reckons their male fan club is growing. The 19-year-old from South Shields, Tyne and Wear, says: “I wasn’t prepared for boys to like us. I thought our fans would be mostly girls, and it was like that at first. Now we get boys saying how much they like us on our Facebook page and dads bringing their kids to our gigs.”

Perrie Edwards has experienced near obsessive adulation. “One guy had a tattoo for me,” says Perrie, 19, also from South Shields. “He came up to me when I was at home and showed me this heart on his hand with a ‘P’ in the middle and said it was for me.” Leigh-Anne, the only single girl of the group, pipes up: “Maybe it was for his girlfriend.”  “Or his mum,” jokes Jesy Nelson, 21, from Romford, Essex.   “I hope it was,” says Perrie. “A tattoo’s a lot of commitment for someone you don’t even know.”

Not that blonde Perrie is interested in any male attention. She is loved up with One Direction’s Zayn Malik, who she has been dating since December. Given the Brit boyband’s huge female following, mustn’t it be hard for her not to feel jealous? Perrie says: “I just think it’s funny. You have to trust each other. Me and Zayn are really happy. We see each other quite a lot, the only time we don’t is when he’s in America. It’s really hard. But I trust him. “It does get hard when you don’t see each other. It does make it more special when you do see each other though. “You just have to make sure you call and text each other all the time and tell each other what you’ve done each day and stuff.

“It’s when you don’t talk to someone that you start missing them. “As far as his fans go, there’s always going to be one or two bad comments, but you’ve just got to ignore it. About one in 100 are bad ones. “I just read all the good ones — most people are really happy that we’re in a relationship and happy.” Jesy and Jade are in a similar situation. Their boyfriends are both in Diversity, the dance group that won Britain’s Got Talent in 2009.Jade, who is dating Sam Craske, says: “I think it’s flattering that they get so much attention. And I think they’d find it flattering if it was the other way around and knew loads of people fancy their girlfriends.”

“We’re strong women, we wouldn’t let anyone treat one of our girls badly,” declares Perrie, a tiny slip of a thing who looks about as likely to punch someone’s lights out as mug her own grandmother. This same protective attitude also applies to their mentor, Tulisa. The N-Dubz star has had a tough few months since a sex tape involving her and ex-boyfriend MC Ultra was leaked on to the internet. She is taking legal action against MC Ultra, real name Justin Edwards, for breach of privacy and confidence, as well as six others, including Chris Herbert, former Spice Girls manager, for trying to sell the video online.

“Tulisa’s tough,” says Jesy. “We haven’t seen much of her because we’ve been busy but she’s good.” Jesy has had her own share of trouble with people criticising her weight and her brother Jonathan, 22, only narrowly avoiding jail in June after he was caught dealing cocaine. She adds: “Unfortunately you have to expect things like that might happen when you get famous. Luckily, we’ve got each other for support. If you’re on your own it would be difficult to deal with.” The last eight months since Little Mix won the ITV1 show have flashed by.

Their X Factor winners’ cover version of Damien Rice’s Cannonball, went to No.1 and their first song after X Factor, Wings, is out tomorrow. Their album, which they co-wrote, follows later this year. They were up for Band Of The Year at the Glamour Awards and they are just about to publish a book charting their story so far, called Ready To Fly. Are they worried that some X Factor winners have fallen by the wayside, like Joe McElderry? Jesy says: “I feel like it was different with us from the start. We were the first group to win, we brought our first single out earlier than the others, we feel good about the album and we’re getting lots of support on Twitter.” In fact, Little Mix intend to be around for a very long time. When the Spice Girls’ performance at the Olympics Closing Ceremony comes up, they can’t help gushing.
Perrie explains: “They were our idols when we were younger. We had their posters in our rooms.“When we looked at different girl groups for inspiration, most of what we took was from the Spice Girls.“It’s brilliant that they reformed for the ceremony. I want us to still do this in our seventies with our Zimmers.” Leigh-Anne adds: “We’ve met Mel C, Emma and Geri. Mel C said the most important thing about staying together as a group is friendship.” They might not have made the Spice Girls’ millions yet, but their bank balances have already benefitted from the first flush of fame. Having money divides the group into the spendaholics (Leigh-Anne and Jesy) and the savers (Jade and Perrie). Jesy admits: “Leigh-Anne and I are bad for spending money. That’s what it’s there for — to be spent.” Leigh-Anne adds: “I’ve spent so much money. I can’t even remember what I’ve bought.”
Jade says: “I don’t spend a lot of money, but I did treat myself to a pair of shoes for over £1,000. They’re so gorgeous. But they’re so expensive I’m scared to wear them. “I had my mum on one side of me saying, ‘That’s a lot of money for a pair of shoes’, and two friends on the other side telling me to go for it.” And Perrie adds: “I bought my mum a car and my brother a laptop. If it’s for someone else then I don’t care how much I’m spending. But if it’s for myself, I feel guilty. “I’ve bought myself a laptop and that’s about it. “One day I’d like to buy a proper old VW Camper van or an old Mini. That’s all I want.”As to what they girls would tell the current crop of X Factor wannabes, it’s simple. Leigh-Anne says: “Just enjoy every minute, be yourselves — and go for it.” -Thesun
Tags: celebritycelebrity big brotherlittle mixs perrieX Factorzayn
Previous Post