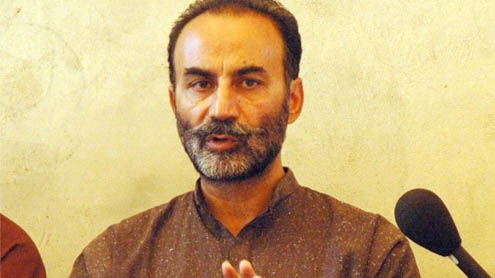 In an unexpected turn of events, one of the most prominent members of the Pakistan People’s Party (PPP) in Balochistan, Nawabzada Lashkari Raisani, has announced his decision to part ways with the party and join the Pakistan Muslim League-Nawaz (PML-N).

The meeting with the head of the PML-N, Mian Nawaz Sharif, which has been hailed as another ‘triumph’ for this party in the wake of growing resentment towards the incumbent PPP, underlines a number of factors that are the hallmark of mainstream politics in Pakistan. Raisani is the younger brother of the former chief minister of Balochistan, Nawabzada Aslam Raisani, who after his dismissal following the bomb blasts in Quetta and the imposition of Governor’s rule in the province, remains abroad (his extended private visit since January).
Laskhari Raisani served as the provincial president of the PPP since 2003, and the reason for his decision to resign from the post and departure from the party is his ‘disillusionment’ with the PPP-led government in the province. According to him, the vision of the late Benazir Bhutto seems to have been lost by the PPP. Realistically speaking, the five-year record of governance of the PPP-led government in Balochistan reads like a dismal report card of an errant student, underlined in red.

The failure of government to start any development work even after being awarded the Aghaz-e-Haqooq-e-Balochistan package and the NFC award is a stark reminder of how the distribution of funds in an impoverished province serves as a lucrative business for the few in charge of public funds. The political structure, which at best sees a change of parties and faces, is a cabal of sardars, who in order to keep their draconian hold on the suffering masses, enrich their coffers while plunging the province into more misery.

There is an unchecked monopoly of policy in Balochistan by the military and its main tool, the Frontier Corps, which is responsible for the growing lawlessness in the wake of ongoing repression and persecution of the Baloch nationalists, whose missing persons continue to increase despite even the Supreme Court’s efforts as there is no accountability of the military-dictated system. The two bomb blasts in Quetta targeting the Shia Hazaras and culminating in more than 200 deaths has left a huge question mark on the governance of the PPP.

The cyclical blame game continues, and Balochistan continues to suffer in the tug-of-power between the army and the civilian authorities. The latest development of one Raisani leaving the PPP to join the PML-N — as it seems to be gaining a foothold in areas where hitherto it had limited electoral power — while the other brother, the man held responsible for the mismanagement of Balochistan remains abroad, is odd, to say the least. How the ‘lost’ manifesto of the PPP will be redefined by Raisani while being in the PML-N, only time will tell. The Balochistan Assembly, which had 61 of its 62 members on the treasury benches in an ‘unholy’ alliance bound together to reap the full monetary and other benefits of incumbency, brought forth a reign of failed policies, chaotic governance, abysmal law and order and almost non-existent development.

In addition, the allegation on the Raisanis of being the masterminds of a ‘mafia’ of kidnapping for ransom in Balochistan leaves an even bigger question on the credibility of those who control the power reins of the province. To leave one party to join another may be a mere opportunistic move, practised in Pakistani politics without accountability, but the fate of Balochistan hangs in uncertainty as one group of apathetic rulers is replaced by an almost identical one, and the misery of Balochistan remains unchanged. – DailyTimes