by Muhammad Asif Jamil
in Editorials
0 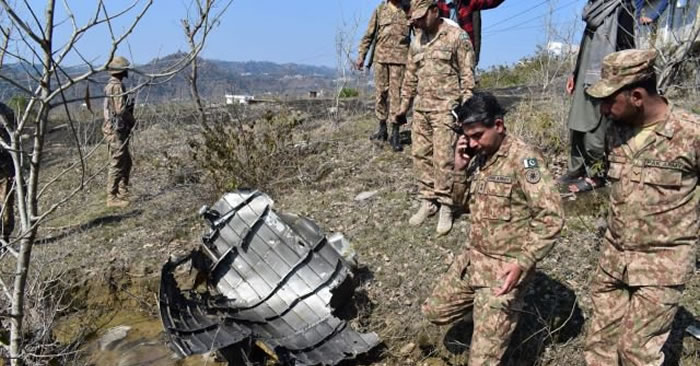 ‘Pakistan Army has taken care of me very well,’ says captured Indian pilot
A video has appeared allegedly displaying one of the two apprehended Indian pilots, in which the pilot is heard lauding the Pakistan Army for the treatment meted out to him after his arrest

“I would like to put this on record and I will not change my statement if I go back to my country also,” said the pilot in the video, who identified himself as Wing Commander Abhinandan

“The officers of the Pakistan Army have looked after me very well,” the pilot said, holding a cup of tea. “They are thorough gentlemen, starting from the captain who rescued me from the mob and his soldiers.”

“This is what I would expect my army to behave as well and I am very impressed by the Pakistan Army,” he added.

When asked by an unseen official where he hails from in India, the pilot, after taking a sip of his tea, says: “Am I supposed to tell you this? Major, I am sorry”.

He then goes on to reveal that he is from “down south” and is married.

Indian PM is chairing a Meeting

Pmln leader and stalwart Ahsan Iqbal says that opposition is united against Indian aggression. All Pakistan is united and on one page. “We have expressed solidarity with the government and are with them on any action they want to take,” asserts Ahsan Iqbal.

President Arif Alvi in his tweet says that PM has conveyed a very clear and lucid message to India. Moreover he says that Pakistan wants peace and a sense of sanity must prevail in the region.
“Very appropriate, precise and compassionate message conveyed to India by Prime Minister Imran Khan,Pakistan wants peace; it is to ready to help in investigation if any actionable information is provided. War has its own unmanageable dynamics, therefore sanity should prevail.”

In his address, PM Imran Khan offers that he is ready for any sort of dialogue on terrorism. He urges that a better sense must be prevailed. He also asserts that both countries should sit together and settle their disputes. He says “I want to take the nation into confidence, we didn’t take action initially because we were unaware of the happenings. He says “We are a sovereign state and the only purpose was to tell that if they intrude here we can go there too. wars are underestimated and no one knows where they lead to. If the situation escalates, then neither it won’t be in my control nor in Modi’s control. He also confirmed that we shot down Two of India’s MiGs because, it is imperative for us to take action when we are intruded.

The Indian Ministry of External Affairs has confirmed that an Indian pilot went missing in action after a Mig-21 Bison fighter plane was lost while engaging with Pakistani jets after they violated Indian airspace. In a short press briefing, MEA spokesperson Raveesh Kumar has stated that Pakistan has claimed to capture two Indian pilots.

Pakistan gives a befitting response to Indian violation by shooting down two Indian jets. Pakistan Air Force (PAF) undertook strikes across the LoC from Pakistani airspace. Addressing to the press conference, DG ISPR Asif Ghafoor said: “we arrested two pilots; one of them was wounded and has been shifted to CMH (Combined Military Hospital) and he will be taken care of and while the other one is with us.”

Moreover, he says that action was taken in self-defense and we don’t want to claim any victory.

Tensions grow along the India-Pakistan border as India calls an all-party meeting to brief opposition leaders about the IAF attack.

Prime Minister Imran Khan is going to address the nation shortly after Pakistan shot down two Indian aircraft. The Premier will take the nation into confidence in the wake of the current situation as tensions escalate with India. The premier is currently chairing a meeting of the National Command Authority (NCA) to discuss a response to Indian hostility.

Background of the incident

On February 14, 2019 (Thursday) At 3:30 pm, a suicide bomber carrying 300kg of explosives intruded into a convoy of Central Reserve Police Forces (CRPF), and killed more than 40 Indian paramilitary personnel and wounded at least 70. The incident took place in Pulwama Indian occupied Kashmir. Then on February 15 (Friday), According to Indian media Jaish-e-Mohammad (JeM) claims responsibility for the bombing. On February 16, India withdraws most-favored-nation status to Pakistan after the Pulwama incident. On February 20,India cancels key bus service to Muzaffarabad, the capital of the Pakistani territory of Azad Kashmir.

Tensions grow along the India-Pakistan border as India calls an all-party meeting to brief opposition leaders about the IAF attack.

Pakistan Foreign Minister Shah Mahmood Qureshi: Pakistan will take international media to the area of strikes, helicopters are being readied, right now weather is bad, will fly when weather permits.

On early morning of February 26 (Tuesday): Pakistan Foreign office said that eight Indian jets intruded into the Pakistani airspace and the intrusion continued nearly four minutes, between 2.54am and 2.58am, and he said that enemy aircraft went up to four nautical miles into the Pakistani airspace. DG ISPR also added that Indian aircraft intruded from Muzaffarabad sector.

He is of the view that Indians have faced timely and effective response from the Pakistan Air Force.I ndians Air force released payload in haste while escaping the area . The payload fell near Balakot. No casualties or damage were reported except some trees fell down.

DG ISPR Asif Ghafoor stated that “Pakistan shall respond at the time and place of its choosing“.

Prime Minister Imran Khan proposed the nation and armed forces to remain prepared for all eventualities.

DG ISPR said that “Response will come and will come differently at a point and time of our choosing. It is you Indians who chose the path of war and now you should be ready for our surprise.”

He said one of the aircraft fell inside Azad Jammu and Kashmir while the other one fell inside Indian Occupied Kashmir.

One Indian pilot arrested by troops on the ground while two in the area.

Video of Indian fighter jets shot down by Pakistan

He writes articles, blogs and editorials. He has in-depth knowledge of current affairs and fashion related endeavours. He has done Masters Mass Communication and Masters English Literature. He is currently associated with Fashion Central & Times of Pakistan.