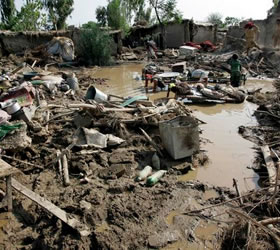 ISLAMABAD, Sep 29 (APP): Malaysians from all walks of life have donated Rs 9.78 million to the Prime Minister’s Relief Fund to help the flood victims, High Commissioner to Malaysia Masood Khalid said on Wednesday. After receiving a cheque worth Rs 2.78 million from the Chairman of International Bureau of Puteri UMNO, Malaysia, Ms.  Shahanim Mohamad Yusoff, in Kuala Lumpur, the High Commissioner said that people of Pakistan greatly appreciated this gesture.

The High Commissioner said Pakistan had suffered from the unprecedented floods that affected 20 million people, destroyed two million houses and washed away 1.3 million acres of standing crops.He said the government of Pakistan was in process of launching a National Reconstruction Plan to rehabilitate the affected people and reconstruct the damaged infrastructure in a transparent and efficient manner.
In this regard, he said, that Pakistan will be needing the help of international community including Malaysia to rehabilitate the affected people.