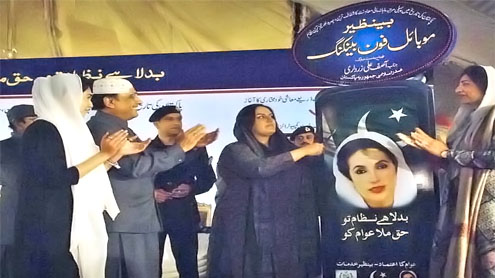 NAUDERO: President Asif Ali Zardari inaugurated livestock insurance scheme here on Sunday. Speaking on the occasion, he pointed out that Benazir Income Support Programme (BISP) was criticised by some sections at the initial stage. However, this programme made a headway and today it has been acknowledged even by many of the countries which have adopted BISP as well.

President Zardari said that the BISP instills  self respect and helps make the beneficiary useful citizen.He said that the BISP are the programmes which an elected government and politicians can pursue and not the technocrats. Service to humanity is worship.President Asif  Zardari pointed out that new programmes are being included in the BISP.God forbid, in case of death, the heirs of a BISP beneficiary would be extended an insurance of Rs 100,000.The President said that the Chairperson of BISP Ms. Farzana Raja, would keep serving the people through the BISP.On the occasion, the President also inaugurated the balloting number 18, 19 and 20 of the Waseela-i-Haq Programme.He also gave away certificates to women under the livestock insurance scheme.In addition, cheques of Rs 100,000 each were also distributed among women so that they could initiate their businesses.During the ceremony, 800 mobile phones were distributed among the beneficiary families of Larkana and Rs 2.8 million cash grant  was also disbursed among them.It was also pointed out that as many as 48,000 mobile phones have been already distributed among beneficiaries in District Larkana and District Layyah of the Punjab. – APP