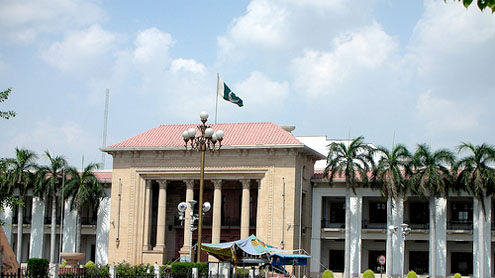 LAHORE: At a time when the general elections are round the corner, the PPP’s clever move to raise the issue of new provinces has virtually put the PML-N in a catch-22 situation for the reason that whatever decision it takes on the issue, it would be the loser.

The PML-N seems to be in a state of dilemma over the issue. If it supports the demand for new provinces and they are ultimately created after amendment in the Constitution, there stands little chance of forming its government in the newly-formed federating units because it has got comparatively lesser vote bank compared to other parties in southern Punjab and Hazara division of NWFP, where the movement for separate province is gaining momentum day by day.

Besides, in the Seraiki belt of Punjab, the people are not happy with “Takht-e-Lahore” because they feel deprived due to underdevelopment in their area. In Hazara, the people are annoyed with the PML-N leadership for a different reason. When the issue of giving a new name to the NWFP (Now Khyber-Pakhtunkhwa) arose two years back, the people in Hazara had visualised “Hazara-Pakhtunkhwa” as new nomenclature for the province. But their concept could not be materialised apparently because of Nawaz Sharif’s obsession for the word “Khyber”. It also gave rise to a violent movement against the new name at that time which is still alive.So there is little or no chance of a PML-N government in place after the new elections.

And if the PML-N opposes the demand for new provinces it will cost it heavily in the form of lesser seats in the new legislatures (Punjab and NWFP), thus reducing the chances of its forming any future government, especially in Punjab.Before going to the next elections, the PPP wants the PML-N to take a clear-cut stance on the issue; and this is probably the reason behind its latest move to table a resolution in the Punjab Assembly in support of a new province.

“If the PML-N opposed the resolution, it will be exposed and people in South Punjab will not vote for it in the coming elections. And if it decides to support the motion and a new province is ultimately created afterwards, even then it will not be in a position to form its government there because of its lesser vote bank in the region”, commented PPP’s Deputy Leader of the Opposition in Punjab Assembly.

In order to come out of the imbroglio, the PML-N has set up a high-powered committee comprising its senior leadership to formulate recommendations on creation of new provinces. It is headed by Senator Raja Zafarul Haq and also includes Javed Hashmi, a veteran politician from Multan, who has of late spoken in favour of carving out four administrative units out of Punjab.The stated position of the PML-N on the issue so far has been that it was not opposed to the creation of new provinces, but they should not be formed on ethnic basis. Punjab Law Minister Rana Sana Ullah on Thursday came up with a new suggestion that a parliamentary commission should be set up to sort out the issue of new provinces as constituted in case of 18th amendment.

It merits mentioning here that PPP had earlier thought of carving out a new province especially in Punjab after the next elections, because it lacked the required majority both in the Punjab Assembly and the National Assembly.Article 239 (4) of the Constitution says : “A Bill to amend the Constitution which would have the effect of altering the limits of a province shall not be presented to the president for assent unless it has been passed by the provincial assembly of that province by the votes of not less than two-thirds of its total membership.”It had, however, decided to contest the next election in Punjab on the slogan of Seraiki province and this was to be made part of its party manifesto as well. But its latest move to bring a resolution in Punjab Assembly seems to get the dual advantage by exposing the PML-N before the elections. – Nation