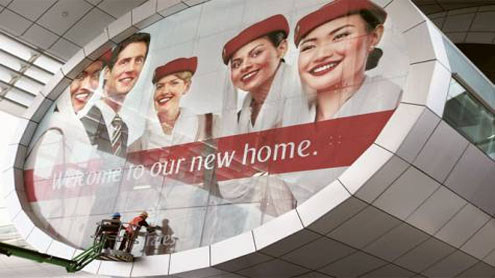 DUBAI: Emirates airline on Monday unveiled a new global brand platform and direction with the theme “Hello Tomorrow,” which positions the global airline as the enabler of global connectivity and meaningful experiences.

For the last decade, Emirates’ “Keep Discovering” theme won it international critical acclaim and countless plaudits. It is highly expected that the new catchphrase will quickly precipitate a big cult following and yield the airline an even better branding policy reward for the coming decade and beyond.The Dubai-based airline is embarking on an integrated marketing communications campaign with a new brand promise as the company continues its evolution from a travel brand to a global lifestyle brand.

Earlier this month, Emirates had been ranked the most valuable carrier in the world in a latest Global 500 study by Brand Finance. The carrier ranked top with a brand value of $3.7 billion and a ‘very strong’ brand strength rating of AAA-. Designed for the age of consumer engagement and empowerment, “Hello Tomorrow” is about inspiring people to greet tomorrow’s unlimited potential, now. Emirates is extending an invitation to try the unfamiliar, create new ideas, and form new visions. The theme encapsulates life’s potential and embracing the future with all the possibilities it holds.

“Our new corporate image and global marketing campaign both underline the confidence we have in our existing products and services, and the vision we have for the future growth of the airline,” said Sir Maurice Flanagan, executive vice chairman of Emirates Airline and Group.“Emirates …. is the catalyst to connect people’s hopes, dreams and aspirations. “Emirates is connecting people and cultures creating relevant and meaningful experiences that are shaping the world,” Flanagan added.

An analyst said the airline is reinventing itself for a more global audience and with a common theme to unite all the markets and destinations it serves, the carrier is clearly looking to build on its brand recognition, particularly as it expands into new areas like the United States and also in Latin America.

“Emirates decision to launch a new branding campaign, with the emphasis on greetings and the future of tomorrow, particularly as it expands its global reach to new markets such as North and South America, the carrier is positioning and leveraging its strength of geographic location to highlight to customers that it can serve them across the globe with a single stop-over in Dubai,” Saj Ahmad, chief analyst at London-based StrategicAero Research, told Khaleej Times.