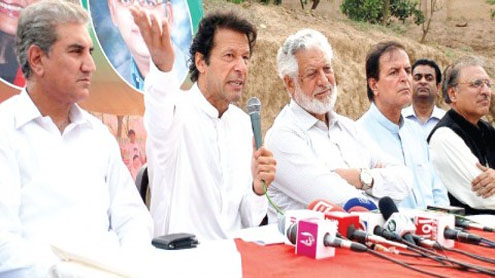 ISLAMABAD: Accusing its nemesis Imran Khan of money laundering, the Pakistan Muslim League-Nawaz (PML-N) on Wednesday accused the Pakistan Tehreek-i-Insaf (PTI) chairman of “gambling away” millions of rupees donated to his hospital in real estate abroad.

Meanwhile, the PTI chief mocked the PML-N’s allegations, saying the party should have at least investigated the matter a little more before going public.Addressing a press conference at Punjab House, PML-N senior leader Khawaja Asif handed out hard copies of “evidence” of Imran’s foreign investments. He alleged that Imran sent the funds, donated to his hospital Shaukat Khanum Memorial Cancer Hospital & Research Centre through money laundering. “Despite opposition from the board of directors of the hospital, Khan invested $4.5 million from the money gained from ‘Sadqaat’, ‘Fitrana’ and ‘Zakat’ in foreign capital markets. He lost 65 percent of the invested capital,” he said.

Asif alleged that Imran sent Rs 210 million to Dubai through money laundering and bought property in Muscat. “In British Virgin Islands, a shell company was first registered. That company transferred money into a company, HBG in Dubai, then HBG bought shares of Sugarland company worth $3 million. During 2009-2010, Sugarland declared losses and in the coming two years, it faced 64% losses. Here, the money of Shaukat Khanum invested by Imran Khan also faced a loss but it was not shown,” Asif said while referring to the documents he had distributed. Asif questioned Imran that if the investment was so safe and profitable, then
why did he not put in his own money rather than that of Shaukat Khanum.

Asif also alleged that those working at Shaukat Khanum Memorial Hospital are either Imran’s friends or family members. “Another important person is Imtiaz Haideri. He is a member of Imran Khan’s trust, is a chief executive in Dubai and a chief executive in British Virgin Islands too.” Responding to Asif’s money laundering allegations, Imran said, “Shaukat Khanum Memorial Cancer Hospital is not Imran Khan’s personal hospital; the patients are not my relatives, they are Pakistanis.” Imran said that by attacking the hospital, the PML-N has caused harm to many Pakistanis who receive free healthcare at the hospital. “It is the only free cancer hospital and PML-N should have thought before doing this,” he said.

Lamenting that the PML-N dragged a welfare institute into politics, Khan said the accusers should have attacked him but not the hospital. Calling PML-N’s allegations baseless, the PTI chairman said the $3 million amount mentioned by Khawaja is already stated in hospital’s balance sheet. “If we had misused the money, we would have not mentioned it in our accounts,” he said, adding that the PML-N leader had in fact relied on their public balance sheet to pick out all the numbers for his accusation.Imran said that the hospital receives money from donors within the country and abroad.

He said the amount of money the hospital gets in Zakat is never enough to provide free health service and so fund raising events are organized to bridge the shortfall. He said that the foreign donations are collected in a dollar account which is managed by the hospital’s endowment fund. “The endowment fund uses this money for investment and earn profit on it,” he declared. “The endowment fund has its own board which decides how to use the money, a board of which I’m not a member,” Imran said, adding that the board decided to invest money in Dubai as property prices were rising back then.

Imran said the money never went abroad from Pakistan as it was a part of the endowment fund and the company, where the hospital’s endowment fund invested, was owned by Imtiaz Haideri, who is also the chief executive. “The investment crashed all of a sudden,” he admitted, but said the owner had promised them that they will earn profit on the investment and will not incur losses. “Khawaja might be upset by this but I want to tell him that we have received Rs 40 million from a Sialkot businessman and raised Rs 60 million through a fund-raising iftari in Lahore,” said Imran. – PT