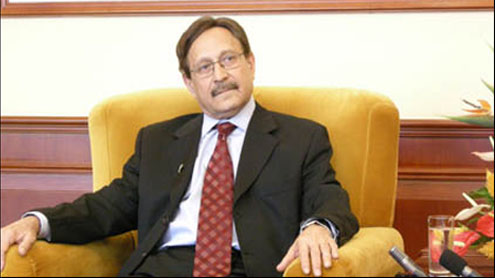 ISLAMABAD: During proceedings of the NRO implementation case at the Supreme Court on Tuesday, Law Minister Farooq H Naek submitted draft of the letter to be sent by the Pakistan government through the attorney general to Geneva, Switzerland, to reopen graft cases against President Asif Zardari, as well as the letter of authorisation to him by the prime minister.

Justice Khosa had underlined the four steps required for implementation of the court’s directives contained in Para 178 of the NRO judgement: the authorisation to write the latter that should be produced in writing, draft of the letter to meet the directive according to the court’s satisfaction, dispatch to and receipt by the Swiss and other authorities concerned and confirmation of such communication. On September 25, the bench had asked for taking the first two steps and submission of the required documents.

The Supreme Court accepted Law Minister Naek’s request and adjourned hearing of the NRO implementation case until today (Thursday).Meanwhile on September 18, after three years of judiciary-executive clash on the implementation of the NRO judgement, Prime Minister Raja Pervez Ashraf took a U-turn by allowing the law minister to write to Swiss authorities to withdraw a letter written in 2007 by the then attorney general Malik Qayyum, asking to stop probe into corruption cases against President Asif Zardari.On August 27, a five-member bench, headed by Justice Asif Saeed Khosa, showed flexibility and asked the PM to authorise either the law minister or the attorney general to resolve the matter.