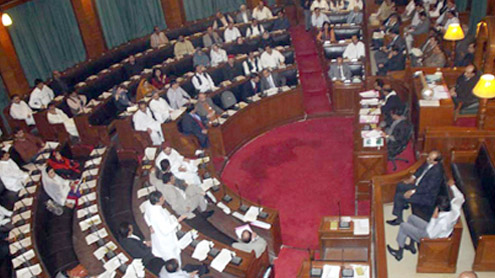 He was talking to media persons after his meeting with Pakistan Muslim League-Q President Chaudhary Shujaat Hussain who called on him at the Chief Minister’s House.The chief minister expressed the hope that a majority of provincial lawmakers “will support the SPLGO and it will be passed in the assembly”.

He said that the Sindh Governor had promulgated SPLGO 2012 and it was required to get it passed from the provincial assembly within a three-month period. Commenting on tendering of resignations of some provincial ministers belonging to certain coalition parties, the chief minister said any minister, who want to quit the government should send his resignation to the Governor Sindh as per rules. “Some ministers had sent their resignations to me, they (resignations) should be send to the Governor,” he said.

On this occasion, Chaudhary Shujaat Hussain said: “We will contest general election jointly and this alliance will continue even after elections,” he said.Governor Sindh Dr Ishratul Ebad Khan had promulgated SPLGO on September 7 this year, under which five major cities, including Karachi, Hyderabad, Sukkur, Larkana and Mirpurkhas had been given status of Metropolitan Corporations while there would be district governments in the remaining districts of the province. – Brecorder