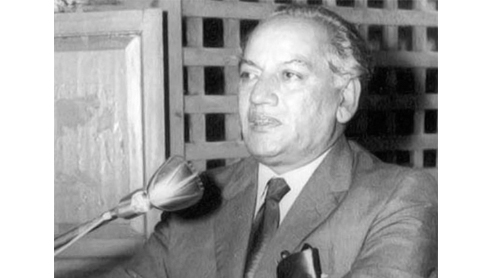 LAHORE: The 28th death anniversary of revolutionary poet Faiz Ahmad Faiz passed silently on Tuesday. Neither the government nor any organisation arranged any ceremony in this regard.

One of the most prolific poets of the 20th century, Faiz was known to have reached out, through his work, to the wealthy and to those less fortunate alike. Dubbed the “Voice of Revolution,” he extended an asylum of sorts to the masses in a period where freedom of speech was crushed to a bare minimum.Faiz was a humble person with an optimistic approach towards life. His love for humanity was free of the prejudice of race, colour or nationality.

Apart from being an innovative poet, he was the poet of beauty and love, and for him, there was no difference between the three; love, beauty, and revolution had become identical in him. Born on February 13, 1911 in Sialkot (Punjab), Faiz wrote several inspirational pieces in both poetry and prose, and became the first Asian poet to be awarded the Lenin Peace Prize in 1963. He was also nominated for a Nobel Prize. Faiz was also listed four times for a Nobel Prize in literature. His open expression of revolutionary ideas, however, was not without its share of consequences.

After death of his father when he was just two years old, Faiz got early education at a religious seminary in Sialkot. At the age of four, he started memorising the Holy Quran. He got higher education from Murray College, also in Sialkot. During this period, he learnt Persian and Arabic from Allama Iqbal’s teacher, Shamsul Ullema Maulvi Syed Meer Hasan. Faiz acquired a post-graduate degree from Government College Lahore, a masters degree in English Literature. He also attended Oriental College in Lahore, where he obtained another master’s degree in Arabic Literature.

He was against imperialism and practically struggled for the rights of people. He supported Spain’s civil war and at the time of the Second World War, when Nazi armies attacked the Soviet Union, Faiz stood up against Nazism. He joined the British Army to practically fight against Nazi forces. When the war ended, he left the army as a brigadier and re-joined the Education Department at a meagre salary.Faiz’s poetry is a great weapon against capitalists and he served as an emblem of protector of human rights. He always emphasized the need to create political awareness among workers.

Faiz took active part in trade union movements before and after the partition of the Indian subcontinent. Faiz also played an important role in the creation of many trade unions like Tanga Union, Postal Union, Railway Union and Mint Workers Union. Faiz was also instrumental in the creation of the Pakistan Trade Union Federation, which was joined by about 100 unions, including his own.

Faiz was elected as the first vice president of the federation.His publication included Ghubar-e-Ayyam, Naqsh-e-Faryadi, Dast Tah-e-Sang, Sar-e-Wadi-e-Seena, Sham-e-Shehr-e-Yaran, Mizan and a collection of literary articles named Merey Dil Merey Musafar, Nuskhaha-e-Wafa, which have since been translated to several other languages earning him international recognition for his works. – Dailytimes