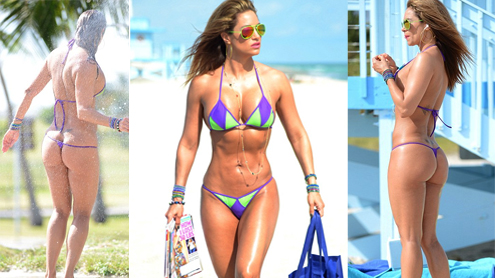 Since famously losing 70 pounds and launching herself as a worldwide fitness guru you would think that Jennifer Nicole Lee wouldn’t need any more diet tips.

However the 37-year-old model and entrepreneur was spotted reading a weight loss article while showing off her curves in Miami Beach on Friday – perhaps she really was picking up some hints for her fitness empire? The mother-of-two is no stranger to showing off her famously toned physique and Friday was no exception.She must have given other beach-goers a real eyeful as she strained out of her miniscule swimwear and then freely de-sanded at the public showers.

Jennifer Nicole, or JNL as she is also known, seemed totally unabashed to be almost naked in the tiny purple and green bikini she wore, complete with G-string bottoms.Her dark hair was lose, but groomed looking and her mirrored aviators matched her two-piece. Armfuls of beaded bangles completed the beach babe look.The curvacious fitness fanatic smiled to herself as she read her magazine and at one point also sported a bright blue crochet jumper, as well as a deep lilac towelling robe. And when she had had enough sunbathing and reading Jennifer Nicole grabbed some scuba gear and larked about in the sea for a bit.After being crowned Miss Bikini America 2006 when she famously lost all the weight, she has made countless television appearances.

And Jennifer Nicole has also used her inspirational story to publish several books, workout DVDs and has launched her own swimwear line.She has also created JNL fusion, her own fitness programme, for which the motto is ‘Strong is the new skinny’.

And it seems Jennifer Nicole is also hoping to take Hollywood by storm.The guru filmed a cameo role for upcoming film Pain & Gain, starring Mark Wahlberg and The Rock, earlier this year. – Dailymail