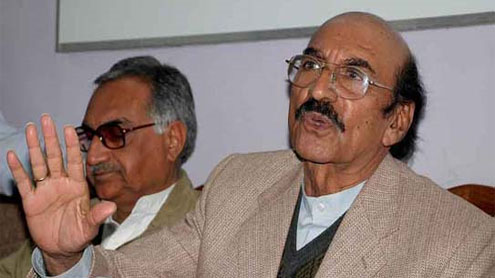 KARACHI: Although, the Sindh Chief Minister (CM) Syed Qaim Ali Shah has recently termed Tando Allahyar as “Bara”, a tehsil in Khyber Pakhtunkhwa (KPK) that is infamous for its arms trade, the district authorities have termed the statements of the CM and the Sindh Inspector General of Police (IGP) Fayyaz Leghari based on inaccurateness, it has emerged.

While briefing the CM, who holds the portfolio of home minister, the IGP had informed that the trade of illegal weapons was going on in the small district of Tando Allahyar that could prove dangerous in the near future. After the briefing the CM had instructed the Tando Allahyar deputy commissioner (DC) Syed Mehdi Shah to submit a detailed report in this regard.Soon after the order, the additional home secretary Atta Soomro forwarded a letter to the Tando Allahyar DC to furnish a detailed report containing details of licensed arms dealers and the weapons they were dealing in, adding that illegal arms business should also be checked in the district.

At a meeting at the CM House, the Sindh CM said that there were so many weapons in the province that he had directed the law enforcement agencies to start a crackdown against arms suppliers.In this regard, a committee comprising of the home department’s additional chief secretary, Sindh advocate general, the prosecutor general and the law secretary would be formed to consult with the federal law ministry and suggest amendments that could be moved in the Sindh Assembly.

Acting efficiently on the orders of the high-ups, DC Mehdi had compiled a detailed report and submitted it with the home department.The report clearly mentioned that Tando Allahyar was a peaceful district with no illegal trade of arms and ammunitions and not even a single person was involved in illegal weapons trade in the district.When contacted, the DC told Media, “We have submitted a report with the home department and the report contains no such stuff as mentioned by the Sindh CM or the IGP”.
“
We have informed the home department about the arms dealers and the types of weapons they are dealing in. Besides the local administration has also clearly mentioned that there was no trade of illegal weapons in the area as is taking place in Bara,” the DC added.According to the CM House spokesperson, the police have started verifying arms licenses and would begin the process of computerisation of data soon. More than 400,000 arms licenses had been issued in the province while Rs 75 million have been paid to the National Database and Registration Authority (NADRA) to install computerised systems in the home department and at all divisional and district headquarters.

Following the new initiatives, the owner of arms license would go to their nearest NADRA office to fill up necessary forms that would be verified by the respective Superintendent of Police (SP) office. Apart from Karachi, such machines have also been installed in Hyderabad and Larkana.Media repeatedly tried to contact the Sindh IGP to seek his version, but his mobile phone was continuously attended by his staff saying that the IGP was in a meeting. – PT