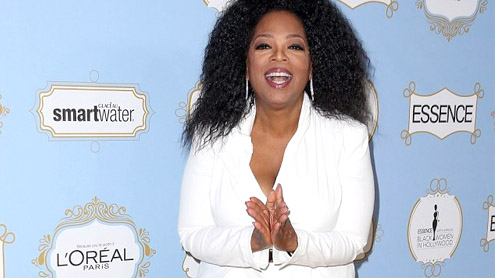 She is already 5ft 7in but Oprah Winfrey added inches to her height for the Essence Black Women in Hollywood awards luncheon on Thursday.

The megastar displayed huge hair in a bouffant style that turned lots of heads as she walked the red carpet.The 59-year-old former talk show host’s tresses were certainly the focus of her look for the daytime event in Beverly Hills.Oprah looked stylish in a chic monochrome ensemble for the annual occasion.

She was sporting a low-cut white peplum shirt along with a simple black pencil skirt and matching court shoes.Oprah was being honoured at the bash, and was accompanied by a group of students from her school in Africa.The philanthropist founded the $40million Oprah Winfrey Leadership Academy for Girls, based in Henley on Klip, in 2007.

And Oprah has made no apologies for spending her millions on building the elite school, where she apparently teaches a class via satellite.In January of last year she travelled to the academy to visit the first graduating students and attend the graduation ceremony for the 72 girls.The star-studded event on Thursday was attended by a whole host of black women who have been influential in the entertainment industry.

Oprah joined the likes of Naomi Campbell, Jennifer Hudson and Kelly Rowland for the bash, held at the Beverly Hills Hotel.Oscar nominee Quvenzhané Wallis, who is just nine years old, also enjoyed the luncheon ahead of the Academy Awards on Sunday. – DailyMail