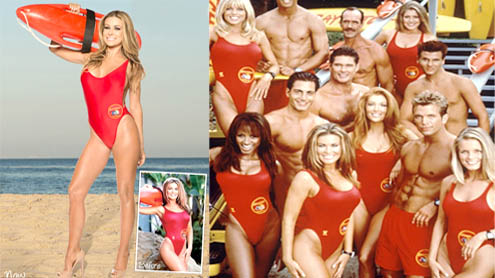 Fifteen years later and Carmen Electra still knows how to work that scandalous red swimsuit.Posing in the one-piece that made her curves famous, the 40-year-old actress/singer channeled her days as a Baywatch babe for the new issue of In Touch weekly.

Though she was hesitant to slip into the suit, Carmen gushed, ‘Once I got it on, I felt amazing,’ adding, ‘It was a million times better than I thought it would be.’ ‘I feel better than I did at 25!’ Carmen told the magazine.Her sexy figure can be credited to a diet rich of lean proteins and veggies and her love of dance.

‘I still have the discipline I learned when I studied ballet growing up,’ she explained.Carmen began her entertainment career as a dancer before skyrocketing in 1997 with her role on the hit series, followed by three Playboy covers. And it turns out that
Carmen would love to travel back in time for the adult print, as well.If given the opportunity to pose again, she revealed: ‘[I’d say] Yes! I love Playboy – they supported me from the beginning.’I heard I’ve had the third-most covers of anyone, after Pamela [Anderson] and Anna Nicole Smith. I’m very proud of that!’It was recently announced that Carmen Electra and Simon
Cowell have split, putting the stunner back on the market with more time to pursue these goals if she chooses to do so. – DailyMail