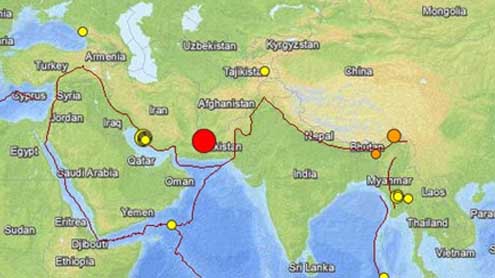 KARACHI: A major earthquake struck a region near the Iran-Pakistan border on Tuesday, with at least five people killed in Pakistan’s southwestern areas, officials said.

Meanwhile, Iranian state television reported at least 40 people killed in the aftermath.Three women and two children were killed when their mud house collapsed in the district of Panjgur in the Pakistani province of Balochistan, according to government officials from the area.An Iranian government official said he expected hundreds of deaths from the massive 7.8 magnitude earth quake, felt as far away as New Delhi and Gulf cities of Dubai and Bahrain.

“It was the biggest earthquake in Iran in 40 years and we are expecting hundreds of dead,” said the official, who spoke on condition of anonymity.The epicenter was in southeast Iran in an area of mountains and desert. It was located 201 km southeast of the Iranian city of Zahedan and 250 km northwest of Turbat in Pakistan, USGS said.Tremors were felt across several Pakistani cities, including Quetta, Pishin, Killa Abdullah, Chaghi, Sibi, Jaffarabad, Karachi, Hyderabad, Quetta, Badin, Islamabad, and Rawalpindi.

According to reports, the earthquake shook areas from Quetta to Pak-Iran Border Taftan and Pak-Afghan border Chaman. And Mekran belt near Arabian Sea.Several part of Khyber Pakhtunkhwa province, including Peshawar and Dera Ismail Khan, and the Federally Administered Tribal Areas, also felt the jolts.Tremors from the earthquake were felt as far away as New Delhi and the Gulf cities of Dubai and Bahrain. Across the Gulf, high-rise buildings swayed and officials ordered evacuations. Dubai has the world’s tallest tower, the 828-meter Burj Khalifa.Last week, a deadly 6