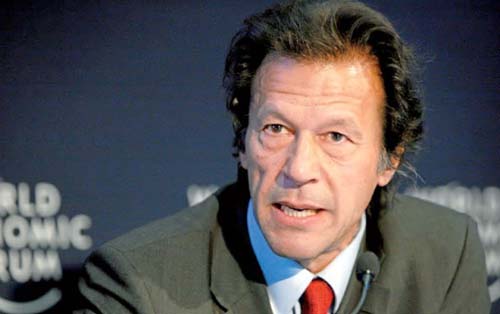 PTI Chairman Imran Khan, rejecting the generous offer of the prime minister for a superior judicial commission to probe the alleged rigging of 2013 polls, has said he will accept the commission only when the premier steps down.  He said the PTI would accept the transparency of a commission formed under a caretaker setup minus the incumbent rulers.

Imran’s fresh position for electoral reforms put his democratic credentials in question. He said the Azadi March would be launched at all costs and no offer could stop it now.  Addressing a press conference at his residence on Tuesday, he said: “I have no personal enmity with Prime Minister Nawaz Sharif.”  About the PM’s address to the nation, Imran Khan said, “We know very well about the style of governance of Nawaz Sharif which the masses don’t want to experience anymore.”  The PTI chairman said: “The incumbent rulers were not ready to open four constituencies identified by his party for probe, but now, fearing a massive march, have expressed readiness to form a superior judicial commission to probe the 2013 poll rigging.”

He claimed: “We are ready for re-election in Khyber Pakhtunkhwa, and I assure all of you that the PTI will return victorious. But I fail to understand what stops the rulers from testing their mandate through a re-election.”  Claiming that PTI marchers would remain peaceful, Imran accused the government of tasking a large number of ‘Gullu Butts’ in police uniform to attack the marchers on Islamabad.  He claimed: “The system formed under a PTI government in KP would hold Imran Khan accountable first for his misdeeds before any demand from others.”  He remarked the sitting government was not a democratic rule, but a family’s limited company which could not be tolerated by the people anymore.  [contentblock id=2 img=adsense.png]

Imran said the prime minister should listen to the speech of his interior minister who admitted on the floor of the parliament that there were 60 to 70 percent unauthenticated votes, but the premier didn’t accept the rigging.  The PTI chairman claimed all the development projects of the government only exited in advertisements and not on the ground as the real story of government claims on this count started from Nandipur Power Project.  He said: “Election Commission officials were a party to the crime of stealing the people’s mandate in 2013 and they should be sent behind bars.” Imran said he would make shocking revelations in Islamabad regarding mega corruption scandals of the ruling family.  He reiterated Azadi March would remain peaceful as long as the ruling party activists were peaceful, but he would not guarantee peace “if the ruling party’s goons made any mischief”.

Meanwhile, the ‘tsunami’ which wanted to bring a real change thrashed senior journalists, with the own partymen denying entry to the party chairman’s residence on the event.  Senior reporters, with the help of veteran PTI partymen, had to force their entry into the PTI chief’s residence to cover the highly mismanaged event.  A conflict between the party’s Punjab and Lahore groups added to the bad taste. The event had been arranged by the city chapter of PTI that deputed security men to allow entry to most of their own group members. Due to this internal politics of the party, many senior reporters were abused and manhandled by the PTI security men. But no PTI leader even bothered to apologise to the journalists.

PM UTTERED NO WORD ABOUT MODEL TOWN TRAGEDY: QADRI Pakistan Awami Tehrik chief Dr Tahirul Qadri said that not a single principle of democracy has been practiced in the country since its inception.  He said this while talking to media outside his residence in reaction to Prime Minister Nawaz Sharif’s address to the nation on Tuesday. Qadri said that the PM did not utter even a single word regarding the Model Town tragedy wherein 14 people lost their lives and more than 90 injured on June 17. He said that one of his workers suffered cardiac arrest and died on the spot as he could not be shifted to hospital due to the closing of road in Model Town. He said the body would be shifted to Rahimyar Khan after offering funeral here today (Wednesday).

“Is this the democracy wherein a patient cannot be shifted to hospital,” said Qadri questioned.  Dr Qadri said that thousands of his workers including females have gone missing. He said Model Town has been made Gaza by the so-called democratic rulers. He said democracy was not the name of only elections rather it was the system to deliver to the people and good governance. He said the masses empowered and given their rights in a democratic society but in Pakistan, the situation is quite different. He said democracy is interlinked with the rule of law and transparency. He said it was not the system to use the state institutions for political motives.