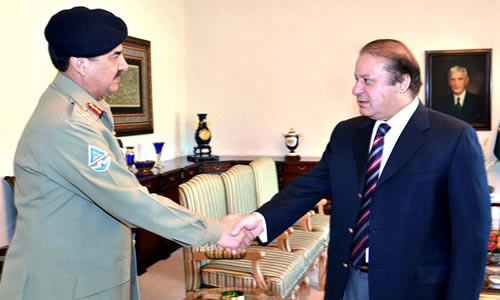 Credible sources told Dawn that PM Nawaz took the COAS into confidence over the several rounds of talks that the government had held with the Pakistan Tehreek-i-Insaf (PTI) and Pakistan Awami Tehreek (PAT) leadership. Both agreed on the need to resume dialogue in order to end the political deadlock in the country.

The premier made it clear that the government had shown flexibility on certain matters during talks with the PTI and PAT leadership, however, he said that certain demands made by the PTI and PAT were against the Constitution. The premier also took the COAS into confidence over registration of First Information Report (FIR) on the Model Town incident and assured him that all government functionaries, including ministers, nominated in the FIR would extend full cooperation.

This is the second such meeting in a week between the premier and the COAS, the first was held on Tuesday, August 26 during which the two had agreed to immediately resolve the political cul-de-sac.

A political deadlock currently clouds the horizon of the country as two political parties PTI and PAT have been holding anti-government protests for more than two weeks.

The protesters holding sit-ins in the federal capital are demanding the ouster of the premier through his resignation, with PAT chief Dr Tahirul Qadri calling for an overhaul of the system altogether. – DAWN