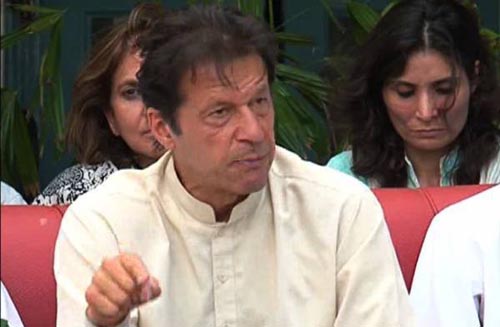 Contrary to his call for ‘civil disobedience’, the government has claimed that Pakistan Tehreek-i-Insaf (PTI) chairman Imran Khan has himself paid his two electricity bills for August. “Khan Sahib has paid his two electricity bills,” said Federal Minister for Water and Power Khawaja Mohammad Asif at a news conference he had called to respond to Imran Khan’s remarks about $34 billion Chinese investment on Tuesday.

The minister claimed that the PTI chief’s two electricity bills of Rs17,000 and Rs13,000 had been paid. Imran Khan gave a call for civil disobedience on Aug 18 and asked people not to pay taxes and utility bills to force the government accept PTI’s demands. When a journalist pointed out that Imran Khan had not paid an electricity bill of Rs44,000, the minister said this might be an illegal connection. He said he would investigate the matter and if it is found to be an illegal connection or that its bill has not been paid the power supply would be disconnected. The minister said no one would be supplied electricity without payment and supply to defaulters would be disconnected. He said the government had been able to bring down circular debt from Rs295 billion to Rs238 billion and had made an additional collection of Rs5 billion during the month of August.

He rejected Imran Khan’s claim that China is providing $34 billion to Pakistan at seven per cent interest as a loan and not investment. “This is foreign direct investment,” the minister said, explaining that Chinese companies setting up projects in Pakistan would be provided funds by three Chinese banks — China Exim Bank, Industrial and Commercial Bank of China (ICBC) and China Development Bank —

for investment which would have no liability on Pakistan’s balance sheet. He said it was a typical and standard procedure for all independent power producers where private companies arrange funds through borrowing which is always a liability of investors and not the government. He said Imran Khan could not understand these issues, but his aides like Asad Umar and Jehangir Tarin could explain it to him had he consulted them before issuing statements.

Responding to another objection raised by Imran Khan, the minister did agree that multilaterals like Asian Development Bank and the

World Bank extended loans to Pakistan at 2-4 per cent interest rate compared to seven per cent provided by Chinese banks to Chinese companies. He, however, explained that multilateral extended concessional loans and assistance to the state and that those could not be compared to commercial loans. He said the ADB-WB loans appeared directly on the balance sheet of the state because it was issued on sovereign guarantee and a national liability unlike power projects established under power purchase agreements. He said no procurement rule was amended to facilitate power projects nor there was any intention of the government to do so although many proposals had been in circulation in past. -dawn