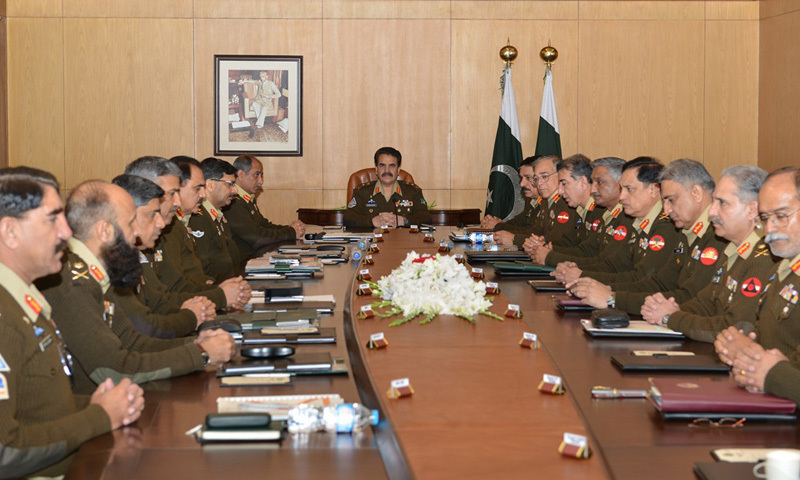 While the controversy over the establishment of military courts continues, the army has already strengthened its legal department and created a new post of Director General Lawfare Directorate, which will be held by a Major General. In this regard, the military authorities have also started collecting information on military officers holding a graduate degree in law. These efforts at strengthening the legal department are three months old. And by now, Major General Mohammad Irshad has been assigned the position of DG LD and that he assumed charge on December 28. By the second week of September, the military authorities had held an “in house discussion” on “legal challenges faced by Pak Army and the way forward”. In this discussion, it was decided to upgrade the military’s law directorate. Till recently, the legal directorate of the army was headed by a Judge Advocate General (JAG), a brigadier rank officer, who oversees all the military-related litigation within the army and in the civilian courts. Sources said the September meeting was chaired by Chief of Army Staff (COAS) General Raheel Sharif and attended by others such as the Chief of General Staff, Director General Military Intelligence, JAG, and Director Military Intelligence.

In this meeting, the COAS “formally approved creation of new Lawfare Directorate (LD) under a Director General (DG), an officer of the rank of Major General.” In addition, the meeting approved that “a suitable DG be attached forthwith to oversee and evaluate the prospects of suggested LD in 2-3 months.” It was also decided to engage civilian lawyers for this department. Last but not least, it was also decided that the COAS “will review the progress on a monthly basis”. It is noteworthy that these decisions were taken by the military in September and preceded the decision to establish military courts that was taken in the wake of the December attack on a school in Peshawar. The military courts, if and when they are established, could ostensibly increase the workload of the army JAG branch. However, military authorities reject any connection between the military courts and the decisions taken by the military leadership in September. An official of the Inter Services Public Relations (ISPR) told Dawn that the Lawfare Directorate had been established to enhance the capacity of the already existing JAG branch. Some experts, nonetheless, feel that this enhancement of capacity needed new legislation.

Retired Colonel Inamur Rahim, who has served in the army’s JAG directorate, told Dawn that the military’s decision to establish a Lawfare Directorate would require an amendment to the Pakistan Army Act (PAA) 1952. He said under the PAA, the JAG deals with the army related litigation. “The assistant JAG initiates the legal process for a trial in the military court, the deputy JAG proceeds with the trial and then the matter goes to JAG who forwards legal opinions to the COAS so that the latter can make a decision in legal matters.” He added: “Since the DG LD position is a new one, the government has to amend the PAA.” But this is not the only opinion around. Legal expert Ahmer Bilal Soofi, on the other hand, is of the view that there is no need to amend the PAA for the creation of the DG LD post. “It is an upgrade of the legal directorate aimed at capacity development of the military officers and it does not need any amendment,” he said. He explained that the military’s decision was in keeping with modern practices as states have moved away from a ‘warfare’ approach and instead adopted ‘lawfare’ as an alternative means of achieving their objectives.

Giving an example, he said, following the 2008 terrorist attacks in Mumbai, India had opted for a lawfare approach instead of attacking Pakistan. New Delhi successfully lobbied before the UN and the US to proscribe the offenders and its insistence that Pakistan fulfill its obligations under UN Security Council Resolution 1373 and bring to justice the Mumbai attack suspects also yielded results. According to him ‘lawfare’ is a new doctrine which can be used by other departments such as the foreign ministry also. “The army can use the ‘lawfare’ directorate for safeguarding its strategic objectives,” he added.

“For example, if the security agencies find any clue that links the perpetrators of the Peshawar school attack to Afghanistan, there are two solutions: either we can use force or go into litigation,” he explained. The best solution to deal with the situation is to file an FIR, submit a challan to the court and then take up the matter with the country concerned besides highlighting it internationally, he argued. -dawn