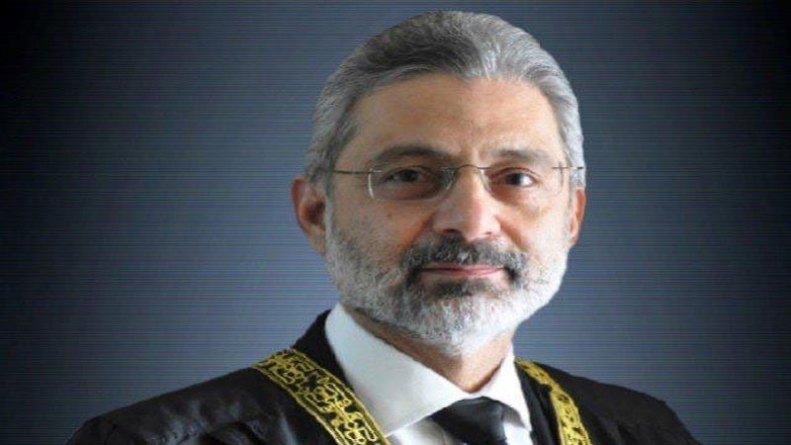 Supreme Court judge Umar Ata Bandial has observed that the good thing in Justice Qazi Faez Isa case is that his family members transferred money for buying properties in the United Kingdom through banking channels and not through illegal means like hawala or hundi.

When a 10-judge bench on Monday resumed hearing of the review petitions filed against the Supreme Court’s June 19, 2020 split order to refer the case of the Isa family’s foreign assets to the Federal Board of Revenue (FBR), Justice Isa’s wife Sarina Isa started her arguments with the assistance of her daughter.

One of the members of the bench, Justice Yahya Afridi, however, pointed out that the FBR official has admitted that Sarina Isa transferred more than the total value of the three UK properties.

He also noted that there is no illegality in using the money sent for educational purposes for purchasing flats. Another judge, Justice Syed Mansoor Ali Shah, said a substantial amount was transferred from Sarina Isa’s own accounts.

During the hearing, harsh words were exchanged between Justice Munib Akhtar and the petitioner judge, Justice Isa, twice after the former made queries from Sarina Isa. When Justice Isa raised objections to these queries, Justice Akhtar asked him to sit down.

In the meanwhile, the bench summoned the FBR report regarding Justice Isa case from the Supreme Judicial Council (SJC) secretary. Copy of the report will be provided to Justice Isa today (Tuesday)

Presenting her arguments, Sarina Isa said she had voluntarily come on June 18, 2020 before the court and explained about her work, earnings, finances, foreign currency accounts and remittances.

She claimed during the hearing of the petitions, Justice Bandial had said he was fully satisfied about her source of funds and remittances. The petitioner said she assumed that the presiding judge had spoken on behalf of all the judges as no one had contradicted him.

“The recording of the proceedings confirms this. Therefore, it came as a shock to the petitioner [Sarina Isa] that a day after, in order dated 19th June, seven honourable judges had changed their minds and directed the FBR to issue notices to the petitioner.

“The petitioner is also pained to read in the main judgment that the petitioner had ‘sought to make a statement without oath’ which she had not declined to do so (the recording of the proceedings may be heard to confirm this) and if she was asked to take an oath she would have done so happily.

“In any case, the petitioner states on oath that whatever she had stated was true and is further prepared to take an oath before this court,” she said.

Sarina said her fundamental rights had been violated as Article 25 of the Constitution guarantees against discrimination and female gender specificity.

“The official respondents [from FBR] have acted dishonestly and maliciously to first bizarrely interpret section 116(1)(b) of the Income Tax Ordinance, 2001 and then applying it to a lone woman taxpayer in Pakistan, only because her husband is in the crosshairs of Mr Imran Khan’s government.”

This is grotesquely discriminatory, she further stated. Sarina said she was made to suffer public humiliation and her fundamental rights of a fair trial and due process was violated.

“Notices to the petitioner were pasted on full public display. Lies were told that the day her father [Abdul Haque Khoso] died [on June 25] she refused to receive notices.

“The petitioner comprehensively replied to the notices, prompting the FBR to dispatch another and then another, she was hounded and bombarded with 9 notices, probably an FBR record in dealing with a solitary taxpayer.

Sarina said she never sought time or an adjournment despite the tragedy in her life and her personal difficulties, replying to 8 notices in less than a two-month period, “which decisively tells the story.”

She stated that Prime Minister Imran Khan sold his London property for £715,000 in 2003 a year before the petitioner bought her first property and 10 years before buying the remaining two properties.

“Mr Imran Khan bought his London property in the name of an offshore (Jersey) company. The petitioner and her children bought the three properties in their own names.

“The petitioner and her children did not have to avail of a tax amnesty scheme. Mr Imran Khan paid a penalty amount of Rs240,000 as his total one-time non-recurring tax liability on an asset of £715,000.

“The petitioner and her daughter pay income tax on the rental income from the properties every year both in the United Kingdom and Pakistan, each year paying more than what Mr Imran Khan paid once in his entire life.

“The petitioner and her daughter individually pay more income tax every year than Mr Imran Khan; and Mr Imran Khan never disclosed the source of funds used to purchase his property nor the money trail.”

“Will now a judge ever dare decide a case which may offend those in government? Will a judge’s family let him abide by the oath of his office to uphold the Constitution and the law?

“Must every judge and his family pay the price of judicial independence?

“Even if Mr Imran Khan’s government is unable to get rid of Justice Isa, a message has still been sent out to each and every judge in the country – dare be independent, dare decide against us and see what we do to you, your wife and children,” she said.