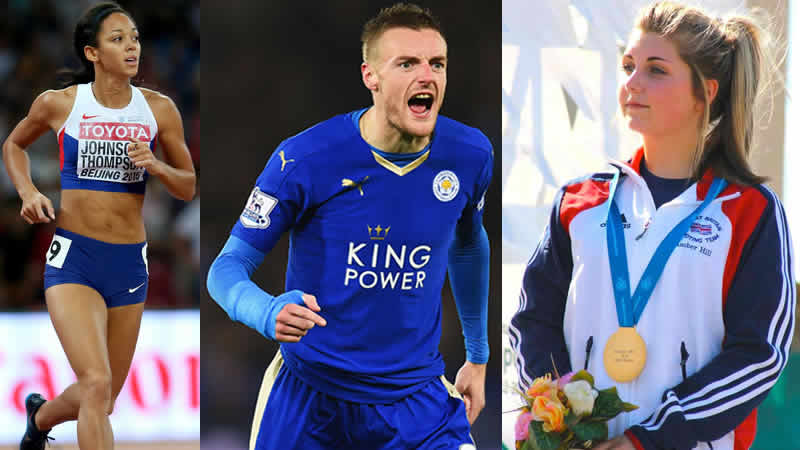 2016 is set to be a bumper year in terms of sports with the UEFA European Championship grabbing audiences’ attention throughout June and early July and then the Olympics in Rio taking centre stage in August.

And of course, the rest of the sporting world doesn’t stop, with the usual excitement and drama of tennis, F1, domestic football, a summer of cricket, the Ryder Cup…..

There is more than enough opportunity for the world’s best sportsmen and women to make their mark, and for new ones to make a name for themselves. So who will be the ones who achieve the biggest success in the months ahead? Let’s take a look at the 10 most important people in sports 2016 at the moment, the ones with the most potential to make 2016 their year.

It was the last Olympics where Watford Born Joshua made a name for himself winning the gold medal but he hasn’t taken his foot off the gas since and 2016 looks like it could be his best year yet. Despite only having 16 professional fights, his 2-round demolition of Charles Martin in April saw the heavyweight claim the IBF World Title. All 16 fights have ended inside the distance, and he has only heard the bell at the end of the third round once. He has made the London O2 Arena his home, with tickets selling out for the Martin fight in just 90 seconds. Joshua has his first defence against Dominic Breazeale coming up in June, and if he successfully comes through that, there are many mouth-watering fights that spring to mind in the suddenly rejuvenated heavyweight division: David Haye, Tyson Fury and Deontay Wilder to name just a few.

Jamie Vardy could be forgiven for pinching himself every time he gets out of bed to check he isn’t still dreaming. The last 12 months have been nothing short of phenomenal for the soccer player. His 22 goals and 6 assists not only helped Leicester to their historic Barclays Premier League title, but have made him a dead cert for a place on the plane to France in June. He was named the Football Writers Player of the Year, and is currently the clear favourite for this year’s Sports Personality of the Year Award. Not only that, but producer Adrian Butchard is currently making a film based on his life.

The third in our list of the most influential sports people of 2016 is British Heptathlete Katarina Johnson-Thompson. Following in the golden footsteps of such stars as Denise Lewis and Jessica Ennis (who Katarina will compete against in Rio), she certainly has a hard act to follow, but the Olympics could be coming at just the right time for the Liverpudlian. She has her eyes firmly set on the Gold in Rio, and if these latest photos as part of her role as the face of Dulux’s Colour of the year are anything to go by, it’s a colour that certainly suits her.

People are loathed to burden the new talented crop of England’s footballers with titles such as the golden generation, but Roy Hodgson has certainly got an abundance of riches to choose from. We could have chosen any one from half a dozen potential stars to make a name for themselves in France this June, but Deli Ali has shown with his performances for both Spurs and England that he could be the best of the lot. His 10 goals and 9 assists for Tottenham together with man of the match performances for the national side have led many to believe he could be the next superstar to wear the three lions this summer and beyond.

Four years ago the nation fell in love with Bradley Wiggins and his sideburns and 2016 could see a repeat performance (though the chops have gone!). He was the first Briton to win the Tour de France, and also has 7 Olympic medals  4 gold, 2 bronze and 1 silver. Any success at all in Rio will make Wiggins the most decorated British Olympian in history.

For years now, it has been impossible to make a list of the potential sportspeople of the year without including Cristiano Ronaldo. He has torn up practically every scoring record in his time at Real Madrid. This season alone he has scored 40 goals in 46 appearances, as well as knocking up 20 assists. With his great rival Messi not featuring at the Euros for obvious reasons, the summer of 2016 it is Ronaldo’s chance to nail down the position of the world’s best footballer once and for all. Cristiano Ronaldo is listed among the Most Important People in Sports 2016.

2016 could be one of the biggest years in Murray’s career. The 2012 US open winner and 2013 Wimbledon Champion has lost in 7 other grand slam finals, the latest being in this year’s Australian Open against friend and rival Djokovic. If he can convert more of those final appearances to victories, he will be on his way to becoming one of the most successful tennis players ever. This year also gives the chance for the Scot to defend the Olympic gold he won so memorably in London 4 years ago. If he does, he could also hold on to the Sports Personality Award he picked up last year, and become the first person to win the esteemed title for a third time.

Few people would have thought to include pro golfer Danny Willett’s name on the list of the most important sports people of 2016, at the beginning of the year, but with his victory in Augusta he makes it to number 8 on our list. Willet became only the second Englishman (the other being Nick Faldo) to win the green jacket, and the first European for 17 years. He will not only be looking to add to his success in the forthcoming majors but will have an eye on making it onto the European Ryder Cup team too.

It is no surprise Jamaican sprinter Usain Bolt has made the list, particularly in an Olympic year. Bolt is the fastest man on the planet – he not only holds the 100 metre world record of 9.58 seconds, but also has the second fastest time ever run (9.63 seconds). In Rio, he will be looking to make history when he defends both the 100 metres and 200 metres titles for the second time. Bolt is listed in the 9th spot of our list of Important People in Sports 2016.

Read More: Radio Pakistan to go Off Air in Favour of Sports Complex

The Olympics is a chance for those who compete in less popular sports to have their time in the limelight too, and sport shooter Amber Hill is someone who could very well be the star of this year’s events in Rio. The 18 year old will be one of the favourites to win gold in the women’s skeet event, after becoming the youngest World Cup gold medallist in 2013. Britain has a strong tradition in shooting at the Olympics, and Amber will be looking to add to their current haul of 44 medals. All ten of these exceptional athletes, who are the Most Important People in Sports 2016, have already had phenomenal years, and over the remaining 8 months will be looking to make a case to becoming the most important sports person of the year. Whether they achieve their dreams or not, we will certainly enjoy every second of watching them try.