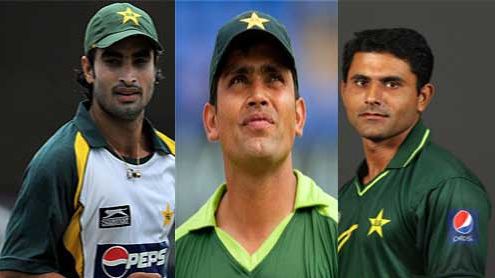 LAHORE – The Pakistan cricket Board on Tuesday included wicketkeeper batsman Kamran Akaml, batsman Imran Nazir and all rounder Abdul Razzaq in the 15-member team for the upcoming Twenty20’s series against Australia in August and September’s World Twenty20.

Mohammad Hafeez who was named captain for T-20 team for the tour of Sri Lanka has been made captain till the end of this year, said an announcement of Pakistan Cricket Board here.  Hafeez was appointed captain for the Lankan tour and the Chairman, Pakistan Cricket Board, Mohammad Zaka Ashraf and the national selection committee reposed their confidence on the leadership qualities of Hafeez by naming him captain till the end of year 2012. Interestingly, Kamran, Imran and Razzaq do not have the central contracts offered recently by the PCB.
Kamran last played for Pakistan in May last year in the semi-final of the World Cup against India, at Mohali, a match India won by 29 runs.

Razzaq, 32, last played against Sri Lanka in November 2011 while Nazir has not played since 2010. “The batsman has been cleared by PCB’s integrity committee earlier this month and was selected after the approval of PCB authorities “,said a spokesman of PCB when asked to comment on the selection of the squad. The 12-team tournament, in which England are the defending champions, will run from September 18 to October 7. Chief selector Iqbal Qasim said the final squad was decided after thorough consultation between the selection committee, Hafeez and coach Dav Whatmore.  “We have selected the best possible squad after consultation and this Pakistan team has the capacity to win the World Twenty20,” Qasim said.  Imran last played for Pakistan in February 2010. Allrounder Razzaq is also considered a surprise inclusion as the experts of the game consider his a spent force due to his poor form and fitness level.

Pakistan, runners-up in the inaugural Twenty20 in 2007 and winners in 2009, are placed in group D of the event, alongside Bangladesh and New Zealand.  Qasim defended recalling Razzaq and Nazir. “They are brilliant players and have experience of international cricket so we have given them another chance,” said Qasim, also backing out-of-form pacemen Mohammad Sami and Umar Gul.  “Gul and Sami are experienced campaigners and their form may be in question but they have class and with their experience can deliver,” said Qasim. Asad Shafiq who performed up to the expectations in test series in Lankan tour with a century and two half centuries is also part of the team which also has opener Nasir Jamshid who missed the Lankan tour due to a fractured finger.

SECP opens Takaful insurance for all

SECP opens Takaful insurance for all