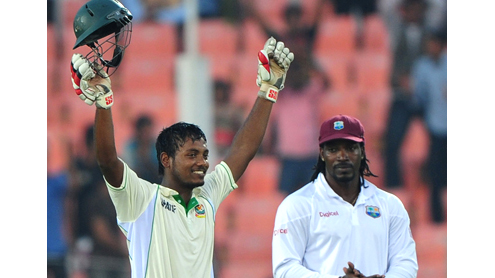 KHULNA: Bangladesh’s Abul Hasan became only the second man in 135 years of Test cricket to hit a debut hundred while batting at number ten, on the first day of the second Test against the West Indies on Wednesday.

At stumps the 20-year-old left-hander was unbeaten on 100. He had added an invaluable 172 with Mohammad Mahmudullah (72) after the home team were in trouble on 193-8.The unlikely hero turned spinner Sunil Narine for two to reach his century and match the feat of Australian Reggie Duff, who scored 104 against England at Melbourne in 1902 while batting at ten.Hasan, whose previous highest first-class score was 61, played with complete authority. He hit 13 boundaries and three towering sixes off just 108 balls to nullify a destructive 5-81 by paceman Fidel Edwards.

Edwards had pushed Bangladesh to the brink five minutes after the tea interval when he dismissed captain Mushfiqur Rahim (38) and Sohag Gazi (nought) in one over.Hasan and Mahmudullah set a new record for tenth wicket in all Bangladesh Tests, beating the 77 by Mashrafe Mortaza and Shahadat Hossain against India at Chittagong in 2007.The pair are just 24 short of beating the world record for tenth wicket in all Test cricket — 195 set by South African pair Mark Boucher and Pat Symcox against Pakistan at Johannesburg in 1998.

An unassuming Hasan said he just wanted to back up Mahmudullah.”When I went to bat, I just wanted to support my partner. I did not know about any record but Mahmudullah told me to bat like a batsman, which I did, and in the end I am very happy to score a century,” he said.The West Indies were sloppy in the field. Kieran Powell dropped Hasan on 42 and Mahmudullah was put down by Darren Bravo when on 37 — both off a luckless left-arm spinner Veerasammy Permaul.

Hasan made the most of his escape, hitting a four and six off Darren Sammy  to complete his half-century off just 55 balls. He continued in the same vein in the last hour.Mahmudullah, a recognised batsman overshadowed by the newcomer, has hit nine fours in his 89-ball knock.Bangladesh, who trail 0-1 in the series after losing the first Test by 77 runs, won the toss but lost opener Nazimuddin in the third over of the innings for just four.

Tamim Iqbal and Shahriar Nafees batted sensibly to add 59 for the second wicket but West Indian captain Sammy struck twice to give his team the upper hand.Nafees edged a wide delivery to the wicket-keeper to depart for 26 while Iqbal was bowled off a sharp incoming delivery for 32. In the second over after lunch fellow paceman Edwards removed first Test centurion Naeem Islam (16) and star all-rounder Shakib Al Hasan (17) in successive overs.

Nasir Hossain (52) and Mushfiqur Rahim (38) put on 87 for the sixth wicket before Hossain was caught by Edwards off Permaul’s bowling. Edwards then took two wickets in his first over after the tea break, having  Rahim brilliantly caught by Ramdin and trapping Gazi lbw.

School of tomorrow trail blazes a new vision for schools

School of tomorrow trail blazes a new vision for schools