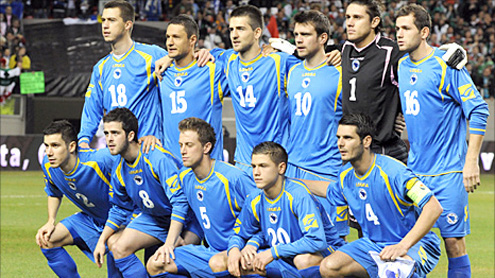 Bosnia-Hercegovina have been suspended from world football after refusing to comply with governing body Fifa’s regulations.

The Bosnian Football Federation (NSBIH) had been ordered to change its three-man presidency into one single position by both Fifa and European body Uefa. But the move was rejected at a NSBIH meeting on Wednesday, prompting Fifa to take immediate action.

The suspension means Bosnia cannot play any international matches. They are currently fourth in Group D of the 2012 European Championships qualifying campaign, five points behind leaders France and a point behind Belarus and Albania but with a game in hand over their rivals. But Bosnia’s next match away to Romania on 3 June looks unlikely to go ahead unless Fifa and Uefa lift the suspension, which also prevents Bosnian teams or officials from participating internationally.

“Fifa and Uefa deeply regret that this decision had to be taken,” the governing bodies said in a joint statement on Friday. The FFBIH is run along similar lines to Bosnia’s complex political system, with a rotating presidency shared between a Muslim, a Serbian and a Croatian. Although Fifa tolerated the system because of the deep ethnic divisions following the war with neighbours Croatia and Serbia in the 1990s, the world governing body demanded the FFBIH fall into line with the rest if the world in October last year.

The federation was given a 31 March deadline to comply, but the move was rejected at a meeting in Sarajevo on Tuesday by the Bosnian Serbs, who opposed the single-president plan because of fears it would jeopardise their autonomy after 28 of the 53 NFSBiH representatives voted against the motion. “Consequently, the NFSBiH loses all its membership rights with immediate effect and until further notice,” said the Fifa and Uefa statement. “The NFSBIH representative and club teams are no longer entitled to take part in international competitions as of 1 April 2011 and until the aforementioned problem is solved.
“This also means that, as of 1 April 2011, no NFSBiH official or representative may participate in any international match or event.”
The move has angered Bosnia manager Safet Susic, who said Uefa should formulate a solution to allow his team’s Euro 2012 campaign to continue.
“There is absolutely no chance that the NFSBIH might find a way out of the present deadlock and get the job done,” said the former Paris Saint-Germain midfielder, whose team have never qualified for a major international event as an independent country.

“These people are incapable of running the NFSBIH properly, although this situation is partly a result of political orders because Bosnia is an ethnically divided country where a dysfunctional system has now caught up with football.
“Denying the players a chance to perform on the big stage through no fault of their own is like sending innocent people to prison.
“We can only hope that Uefa and Fifa will show some level of understanding for our political situation and come up with a feasible model because, quite frankly, I don’t see another way.”

Fifa could install an emergency committee to run emergency panel to run the federation for 12 months, a process which has been used in El Salvador, Kuwait, Senegal and Samoa – BBC