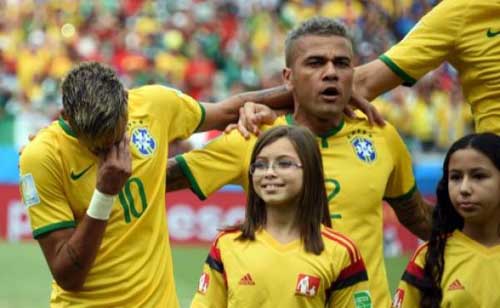 Brazil coach Luiz Felipe Scolari declared himself “satisfied” with his team’s 0-0 draw against Mexico in Fortaleza on Tuesday, and the hosts remain on course to reach the World Cup knockout phase.

However, ‘Felipao’ admitted that improvements still need to be made, as was evident in their opening game, when they came from behind to beat Croatia 3-1 in Sao Paulo.

Here, AFP Sport looks at five areas where the Selecao could fall down in their bid to win the World Cup.

Coping with the pressure:

“The demands are always much greater here in Brazil, but we are prepared,” said Dani Alves after the Mexico game. Nevertheless, the Selecao have shown signs of fragility under pressure in their two matches so far. Seeing Neymar break down in tears at the end of the rousing version of the national anthem at the Castelao brought home the enormity of what this Brazil side are trying to achieve and the amount of pressure they are having to carry on their shoulders.

Against Mexico, the nervous energy transmitted by the crowd in the early stages of the game in particular had an impact on both sets of players. First touches were poor, passes were wayward and challenges came flying in during a frantic opening spell. Brazil at times lack a calming presence — captain Thiago Silva is usually such a cool customer but he has apparently been unable to sleep at night due to the pressure that is as stifling as the heat in Fortaleza.

With the possible exception of Oscar, Neymar is the one player in this Brazil side capable of conjuring up a moment of match-winning magic from nowhere. Fred last week insisted there was nothing wrong with giving the ball to the Barcelona man when the going gets tough. Against Croatia his was a match-winning contribution, and against Mexico he was twice denied by brilliant Guillermo Ochoa saves.

However, seeing Neymar in tears following the national anthem in Fortaleza indicated that he could do with having some of the weight taken off his shoulders. “Neymar doesn’t win or lose on his own. He is part of a group,” says Scolari. “Within the group, he can sometimes be the decisive player. But he wins and loses with the rest of the team.”

Scolari has selected Fred against both Croatia and Mexico, but the 30-year-old Fluminense centre-forward has been ineffective, except for winning the controversial penalty that set Brazil on their way to victory in their opening match. Against Mexico, Fred was replaced by Jo, and he could be a contender to come into the starting line-up against Cameroon on Monday, when Brazil will look to clinch their place in the last 16.

There are no other options, and it is easy to wonder how much of a difference Diego Costa could have made had Scolari shown faith in him and persuaded the Atletico Madrid man to represent his homeland rather than his adopted country Spain.

“Today I felt much freer out on the field, which is fundamental to me,” said Paulinho after the Mexico game. But the Tottenham Hotspur midfielder still didn’t do enough to suggest that he should be an automatic starter against Cameroon.

With a solid centre-back pairing and Luiz Gustavo offering extra protection to the defence, Brazil could do with a more technical, creative player in central midfield. Paulinho has often appeared sluggish, his touch clumsy. Perhaps Hernanes will get his chance to impress in Brasilia.

What about Plan B?:

Scolari wants his sides to come flying out of the blocks and score an early goal. But against Croatia they conceded first and had to rely on a controversial penalty as they fought back to win the game. Against Mexico they often lacked inspiration and couldn’t find a way past Ochoa, leaving Oscar to later lament: “In the first 30 minutes, we had various chances to score but none of them came off. “Mexico play with almost everyone behind the ball. It is difficult to play against opponents like that who counter-attack quickly.” Scolari may need a more efficient Plan B come the tournament’s latter stages.