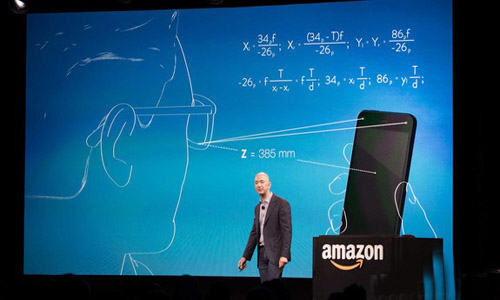 Amazon on Wednesday unveiled its “Fire Phone,” a high-end handset boasting ‘breakthrough technologies,” which enters a crowded market dominated by the likes of Apple and Samsung. Amazon founder Jeff Bezos unveiled the device, Amazon’s first smartphone of its own, which has a 4.7-inch display, a high-definition camera and Amazon’s free help service.

The phone also ties in to Amazon’s vast array of other offerings, serving as a platform for digital content such as books, films and music and connecting users to the firm’s cloud storage. “Fire Phone puts everything you love about Amazon in the palm of your hand — instant access to Amazon’s vast content ecosystem” said Bezos. The handset has what Bezos called a “dynamic” display which shows images in three dimensions, and a scanner which recognizes products for sale and a variety of other objects such as artworks. Amazon described these features as “two new breakthrough technologies that allow you to see and interact with the world through a whole new lens.” The so-called “dynamic perspective” uses a sensor system “to respond to the way you hold, view, and move Fire, enabling experiences not possible on other smartphones,” Amazon said.

Another feature dubbed “Firefly” recognizes things in the real world such as Web and email addresses, phone numbers, bar codes, and millions of products, “and lets you take action in seconds” to buy a product or create a music playlist, for example. Contrary to some speculation, Amazon is not shaking up the pricing model for the smartphone market — selling the device to US customers through AT&T at $200 with a contract, starting July 25. “Fire Phone is less about competing with iPhone and Galaxy and more about helping Amazon continuing to build loyalty, solidifying customer relationships and selling more stuff,” independent telecom analyst Jeff Kagan said. Forrester Research analyst Julie Ask offered a similar view. “Amazon’s success in mobile will not be defined by handset sales, but by what it learns, adds to its portfolio of services, and its ability to increase the quantity and improve the quality of mobile moments with its consumers,” she said.

The relatively small size — closer to the iPhone in size than the larger Samsung phones — allows for easy one-handed operation. The display allows for a more “immersive” experience because it recognizers the user’s position and adapts the image. The new device, Amazon’s first smartphone, has the potential to shake up the segment because of online giant’s clout, large customer base and willingness to sell devices at low profit margins, some analysts said. Trip Chowdhry, analyst at Global Equities Research, said Amazon is now taking on rivals such as Google and Apple head-on. In a note to clients, Chowdhry said the Amazon phone has “innovations that Apple will need to catch up to.”

“Apple has probably fallen behind in innovation — they are still struggling with figuring out the right screen size, while Amazon is racing ahead with innovations, with dynamic perspective and Firefly being the most ground breaking innovations,” Chowdhry wrote, He added that Google and Amazon are now more direct competitors, because Amazon uses a modified or “forked” version of Android. “Amazon.com’s FireOS is not good news for Google, as this could hurt Google’s developer ecosystem and could provide an alternate Amazon’s AppStore to Google’s Play.”

Gullu Butt beaten by lawyers & angry people when he appeared in Court.

Gullu Butt beaten by lawyers & angry people when he appeared in Court.