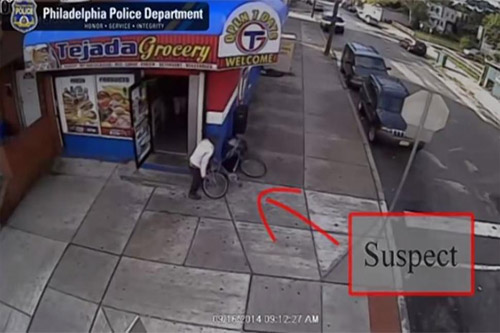 A Philadelphia thief used whatever was handy to rob a convenience store. Surveillance footage shows a suspect grab a banana near a counter,

stick it in the front pocket of his hooded sweatshirt and then point it at a 24-year-old cashier pretending it was a handgun, police said.

The incident occurred at 9:16 a.m. Tuesday at the Tejada Grocery on Poplar Street in the city’s north east section. The black male, described between 5-foot-9 and 5-foot-11, 140 pounds,

with a thin build, and wearing a tan hooded sweatshirt and black pants, can be seen entering the store with cash in his hand. He then waits for a customer to finish with his transaction and heads to the nearby display of bananas.

He then grabs one and puts it in his front pocket and approaches the clerk pretending as if the piece of fruit is a gun. Some cash and cigarettes get handed over and then the theft is actually interrupted as a woman approaches the counter to buy a drink.

After waiting for a few seconds the robber gives up and leaves on his bicycle – clumsily knocking over the trash can on his way down the street.