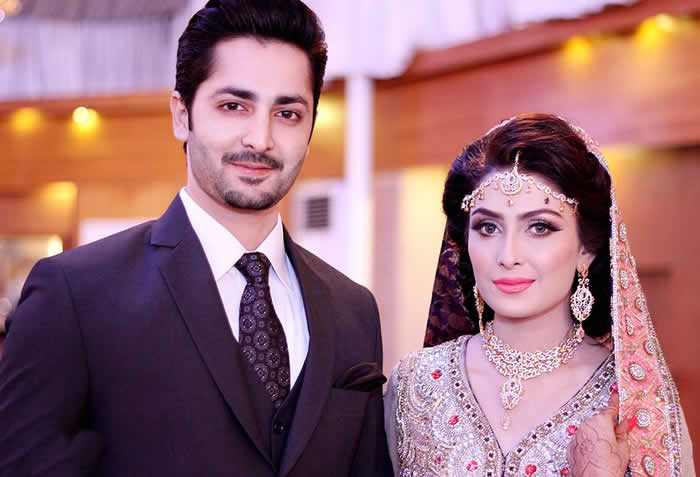 Don’t you just love it when one celebrity marries another? Here are ten celebrity couples that Pakistanis love beyond measure!

This year started off with a bang, when we got a whiff of PTI chairman Imran Khan’s intentions of marrying renowned journalist Reham Khan. Soon enough, after much ‘exaggerated denials’ on Imran’s part, the cricketer-turned-politician fessed up and admitted he was going to marry Reham Khan.

Azfar and Naveen’s wedding was a shocker for the whole nation- since he had embarked upon it only after divorcing his wife Salma. Hassan. Did Naveen really brought to life her infamous Sara character from Humsafar, by breaking up the marriage of the two?

Yup, this is arguably one of the most sweetest and delightful Pakistani couple ever. Ayeza Khan and Danish Taimoor are both good-looking and charismatic. Both have made a name for themselves in the television industry with Ayeza being a part of the immensely successful Pyare Afzal and Danish Taimoor delivering to us hits such as Wrong Number and Jalaibee. They most recently were blessed with a cute baby girl named Hoorain.

Both of them are stellar entertainers and have dominated the entertainment industry of Pakistan. Whilst Yasir Nawaz is the brains behind many content-oriented drama serials (and also a very talented actor), Nida Yasir is a notable actress and even better, Pakistan’s most liked morning show host!

They’ve starred in a couple of movies together and create magic on-screen. Most recently, these two were also blessed with a baby girl.

Ever since she got married to the Sab Set Hai star and popular RJ Mani, his lovely wife Hira has also got the hang of media since she also appears regularly with him on a number of entertainment shows. Nothing like a husband-wife duo and their natural chemistry!

Read More: 10 Pakistani Actress Plastic Surgery Before And After

Making her mark as the most controversial female VJ to ever grace our screens, Mathira’s bold sense of dressing was immediately under the limelight. However, she’s also grooved to a number of songs from movies and made a name for herself as an actress. Her husband is musician Flint J, who is an RnB singer. Most recently, she appeared with him in the music video for a track of Flint’s titled Ishq.

Afzal Khan (Jan Rambo) is married to Sahiba Khan. Both actors were huge film industry stars back in the 90s and made a name for themselves via various Lollywood flicks throughout the years.

Famous VJ and RJ Ali Safina well head over heels in love with the glamorous model Hira Tareen and the two married. This is also considered to be a celebrity couple that people admire. Not as much as the ones stated above, but they are noticed nonetheless.

Atiqa Odho made the news a couple of years back when she tied the knot with architect and PTI founding member Samar Ali Khan. In a low key affair, the two got married on June 8 2012.