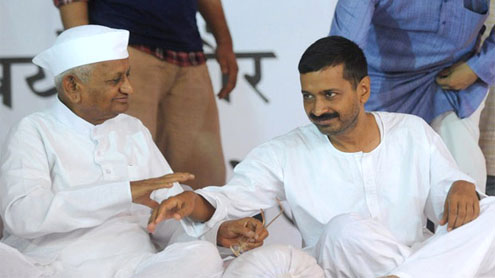 NEW DELHI: Team Anna on Thursday announced their plan to enter the electoral arena with the avowed objective to provide a “political alternative” to the ‘corrupt’ political class as a combination of public indifference and government’s apathy forced them to call off their indefinite fast at 5pm on Friday without accomplishing their objectives.

Anna Hazare said that the anti-graft campaign would support candidates committed to “patriotism” and “country’s development”. Although the veteran protester ruled out joining or supporting a political party himself, the announcement virtually sets the stage for the entry of his colleagues in the electoral fray as an independent group. Hazare hinted as much by saying “it is not wrong to form a political party”, marking a radical switch from the initial posture of an aloofness from political process to embracing it with a “wreck-it-from-within” agenda.

Government and Congress that had all along accused the civil society group of having a hidden agenda seemed to relish the development, greeting the shifting of gears with a “we-told-you-so” response. The fizzling out of the threat of a fresh agitation also meant the abatement of pressure on the regime, with Team Anna harried by mobilizing crowds to back their demands.Besides, it marked the government’s success of the decision to cold shoulder the agitators rather than engage with them. Hence, the fate of the controversial Lokpal bill, which is before the parliamentary select committee that is expected to meet on August 6, is likely to be relegated to the cold storage for a while.

Hazare said that the modalities of how to go about the plan to join the political process would be decided in concert with public who would be sounded out through referendum on issues of selection, funding and monitoring of candidates. It was not immediately clear if the activists were open to “honest candidates” from other political parties.The announcement came on yet another disappointing day when crowds, unmoved by reports of worsening health of Arvind Kejriwal and others, continued to elude the campaign. The dismal turnout at Jantar Mantar on a holiday dashed any hope of a groundswell of sympathy for the campaign, continuing the poor run that started with Mumbai in last December.

With the prospect of another Mumbai-type debacle — this time in the stronghold of the national Capital —looming, Team Anna grabbed at what was seen as the “exit option” provided by a group of eminent citizens who suddenly issued an appeal to the activists to end their fast. Incidentally, not one of the three demands laid down by the activists including setting up of a SIT to investigate in to allegations of corruption leveled at the 14 Cabinet ministers, including the PM, were met.

Saying that they would end their fast on Friday evening, Kejriwal appeared to take pains to stress that they could not have defied the request of “eminent” citizens, who included former SC Justice V R Krishna Iyer, former CEC J M Lyngdoh, ex-Army chief V K Singh and others. Kejriwal said, “This is a people’s movement and we cannot disagree with people’s opinion”. He added, “This is deaf and dumb government and it is futile to expect anything from them”, displaying a reasonableness and realism, which few would associate with a feisty campaign that tapped into popular exasperation with corruption to rattle the government.

However, Hazare betrayed no sign of weakness as he announced a country-wide plan to generate popular awareness. “We will achieve in three years what has not been accomplished in 65 years” he thundered, trying to lift the spirit of supporters giving credence to the phrase “If you can’t lick them, join them.”The political class did not seem worried. For the government which had always accused the Team Anna of having political ambitions, the plan came as a validation of their suspicions. A smiling information and broadcasting minister Ambika Soni said she was glad the political intentions that Team Anna had always harboured were out in the open. “They will realize compulsions and responsibilities of a public servant,” she said.

Opposition BJP blamed the government for delaying the Lokpal while welcoming the plans elaborated by Team Anna. “Everybody has the right to form a party and to contest elections,” BJP spokesperson Shahnawaz Hussain said. The party hoped that Team Anna’s foray would add to the anti-Congress mood, but disputed the assessment that the activists with their populist agenda could end up helping Congress by cutting into Opposition votes.Team Anna was not exactly fazed, asserting that number of footfalls were an old-fashioned gauge to estimate support for the movement. They claimed that issues raised by them had a resonance beyond the supporters at Jantar Mantar. The buzz on social media by Thursday evening would give them the confidence to press on.