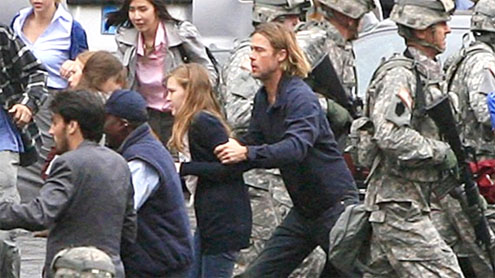 Drew Goddard believes that World War Z is being unjustly put under a ‘magnifying glass’.

Brad Pitt’s zombie apocalypse production is reportedly riddled with problems due to lack of strong direction. Script rewrites, re-shoots and management problems is making this project hard to wrap.Producers solicited the help of Drew to get the project back on track, and the Cabin in the Woods writer-and-director was happy to oblige.

‘I think a lot of that got blown out of proportion. It really was like, they asked me to come look at the movie and give ideas on how to help, and that’s what happened,’ Drew told Collider. ‘That happens all the time, I don’t know why this got blown up with World War Z and it suddenly became a big thing. It’s the sort of thing that happens with screenwriters all the time where you give your ideas on what could help, you write some scenes for people… I feel bad for the sort of magnifying glass that that movie’s under because this is just a normal part of the process, this is just what happens.

‘My involvement was just watch the movie, give some ideas, write some scenes that might help, ADR, just sort of fill in stuff, which is what I did.’Brad’s production company, Plan B Entertainment is behind the movie, which filmed in Europe last year. Originally scheduled to be released in December 2012, World War Z is now aiming to be in theatres June 2013. – MSN