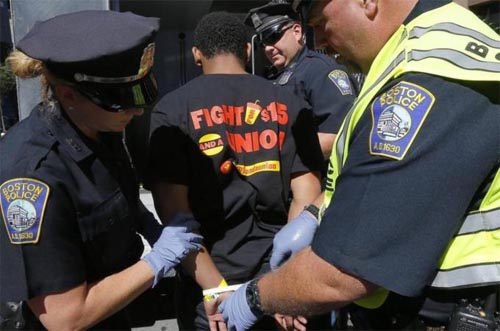 Hundreds of fast-food protesters arrested while striking against low wages

More than 450 people have been arrested at protests across the US over low pay for workers at fast-food restaurants, according to organisers. The arrests on Thursday came as staff at a number of major chains went on strike demanding their wages be increased to $15 an hour. Gwen Moore, a US member of Congress, was among 27 people arrested near Milwaukee, Wisconsin.

Arrests were also made in Chicago, Detroit, Little Rock, Kansas City, Houston and Nashville, the Reuters news agency reported. The recurring union-backed actions, which started in New York, have steadily gathered steam since late 2012. They have helped spur a national debate about the federal minimum wage, which has been $7.25 since 2009. “With $15, I’d be able to save up enough to rent a home for my kids,” said McDonald’s worker Latoya Walker,

Who lives in a homeless shelter and earns $8 per hour. Protest organisers said Thursday’s actions were the biggest to date, targeting chains including McDonald’s, Burger King, Wendy’s and Kentucky Fried Chicken. Many of those protesting work 40 hours or more a week and say they cannot survive on such pay. Experts say about $11 an hour is the poverty threshold for a family of four.

US fast-food restaurants this year are expected to make profits of $7.2bn on revenue of nearly $200bn, according to research firm IBISWorld. Most of their US restaurants are owned by franchisees, who set their own wages and say that raising the hourly wage will hurt their businesses. A McDonald’s spokeswoman said the company supported paying wages that were competitive in local markets and reflected a worker’s skill and experience. -aljazeera