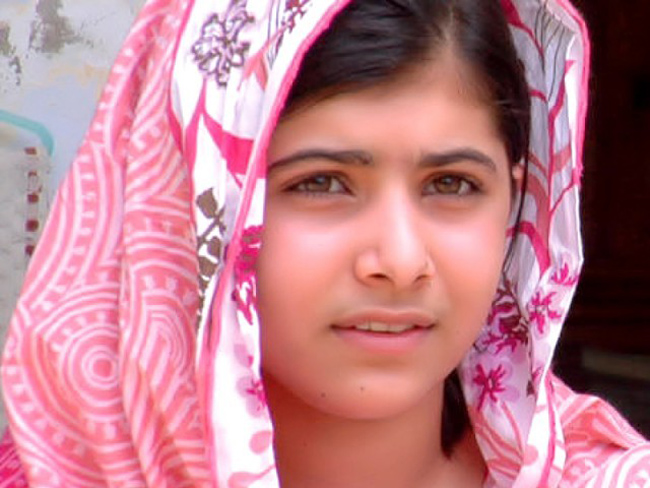 The Norwegian Nobel Committee awarded the prize saying that peaceful global development can only come about if children and the young are respected.

Malala is the youngest person to be awarded the globally prestigious annual prize.

“She is (the) pride of Pakistan. She has made her countrymen proud. Her achievement is unparallelled and unequalled. Girls and boys of the world should take the lead from her struggle and commitment,” he said in a statement.

A number of congratulatory messages came pouring in as soon as the announcement of her win was made. The messages can be viewed here. “The Nobel Committee regards it as an important point for a Hindu and a Muslim, an Indian and a Pakistani, to join in a common struggle for education and against extremism,” the Nobel committee said in a press release which can be viewed here.

“The Norwegian Nobel Committee has decided that the Nobel Peace Prize for 2014 is to be awarded to Kailash Satyarthi and Malala Yousafzai for their struggle against the suppression of children and young people and for the right of all children to education,” the jury said.

Malala Yousafzai — who survived being shot in the head by the Taliban in 2012 — was recognised for fighting for years for the right of girls to education, showing by example that children can contribute to improving their own situations.“This she has done under the most dangerous circumstances,” the committee said.

“Through her heroic struggle she has become a leading spokesperson for girls’ rights to education.”

It also said that the prize recognised work by Satyarthi to head various forms of protests and demonstrations, all peaceful, focusing on the grave exploitation of children for financial gain.“Children must go to school and not be financially exploited,” the committee said.

“In conflict-ridden areas in particular, the violation of children leads to the continuation of violence from generation to generation.”She is the second Pakistani to become a Nobel laureate after Abdus Salam who also shared the prize in 1979 with US nominee Steven Weinberg for physics.

On July 12, 2013, Malala gave a powerful speech at the UN which can be viewed here.There was no clear frontrunner ahead of Friday’s Nobel Peace Prize announcement, with a Russian opposition newspaper, Tunisia’s democratic leadership, Pakistan schoolgirl Malala Yousafzai and Pope Francis among a record number of candidates.

As in previous years, the chairman of the Norwegian Nobel Committee, Thorbjoern Jagland, will reveal the laureate’s name at 0900 GMT at the Nobel Institute in Oslo.The Nobel committee considered a record 278 candidates, but only those made public by their sponsors have been named.

The Nobel committee’s deliberations continued almost until the last minute and a decision wasn’t reached until last week, public broadcaster NRK reported.The broadcaster, which sometimes but not always has been able to predict the winner, wrote on its website that Tunisia’s powerful UGTT workers union and President Moncef Marzouki were among this year’s favourites.

“Union can beat out Malala tomorrow,” it wrote on its website.The UGTT was nominated for its role in Tunisia’s democratic transition, brokering political negotiations that resulted in a post-revolution constitution being signed.

Marzouki, a secular ally of the moderate party Ennahda, was chosen as president in Tunisia’s first election since dictator Zine El Abidine was toppled in 2011.Pundits have also suggested that individuals or groups from the Russian opposition could be a popular choice for the Nobel Committee.

“Russia’s policy in Ukraine, annexing Crimea and questioning borders, but also the way the Kremlin treats dissenters cannot be ignored by the Nobel committee,” said Antoine Jacob, author of a history of the Nobel prizes.For the Nobel committee president Thorbjoern Jagland, “sanctioning Moscow would… be a way to prove that he acts independently, since (Jagland) is (also) the Secretary General of the Council of Europe, which counts Russia as a member,” Jacob told AFP.

Co-founded by Mikhail Gorbachev in 1993 with part of his peace prize money, the pro-democracy Moscow newspaper Novaya Gazeta has been tipped as a possible laureate.

It is one of the few independent media outlets left in Russia and has seen several of its journalists murdered, including Anna Politkovskaya who exposed huge human rights abuses in Chechnya.Pope Francis has become a bookmakers’ favourite for speaking out on poverty.“Today everything comes under the laws of competition and the survival of the fittest, where the powerful feed upon the powerless,” the first Latin American pope argued in an exhortation last year.

Experts have cited Edward Snowden, the former intelligence analyst who revealed the extent of US global eavesdropping, as an outside candidate.However, most experts say he would be a controversial choice for the 878,000-euro ($1.11-million) award.Pakistani girls’ education campaigner Malala Yousafzai, a favourite last year, is once again being mentioned by observers although many say her young age makes her a somewhat less likely choice for the committee.

It could also increase the terror threat against the 17-year-old, who pushed Nigerian president Goodluck Jonathan to meet with the parents of hundreds of girls who were kidnapped by the Islamist group Boko Haram.Kristian Berg Harpviken, director of the Peace Research Institute Oslo (PRIO), a leading peace prize analyst and one of the few to publish a shortlist, put the peace group Japanese People Who Conserve Article 9 — which wants to maintain the Asian country’s anti-war constitution — in first place.

“We may have come to think of wars between states as virtually extinct after the end of the Cold War, but events in Ukraine and simmering tensions in East Asia remind us they may reappear,” he wrote.

Among the other main contenders  was  favourites were Congolese doctor Denis Mukwege, also tipped last year, who has treated female victims of sexual violence for the last 25 years, and the human rights activist Ales Bialiatski from Belarus, who was released from prison by the Russian-backed dictatorship in June. Source: tribune.com.pk