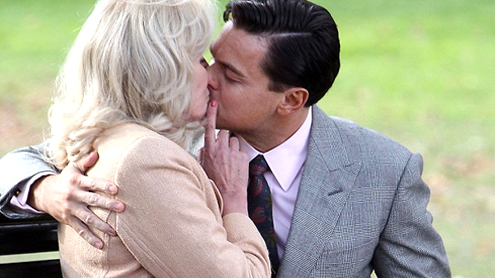 You can hardly blame Joanna Lumley if she seems to be enjoying her work today.The 66-year-old was busy filming long smouldering kissing scenes with her handsome co-star Leonardo DiCaprio, 38, on the set of their new movie Wolf  Of  Wall  Street in New York.

And Joanna had a broad smile on her face as she came up for air between takes.The Absolutely Fabulous actress was dowdily dressed in a mid-length floral dress and matronly jacket for her role as Patricia, looking little like her usually glamorous self.But that didn’t put off DiCaprio’s character. The co-stars walked in Brooklyn’s Prospect Park before sitting together on a park bench to embrace.

Even between takes it seemed the pair were enjoying one another’s company, sharing a laugh and staying arm-in-arm as they warmed up in down jackets.British star Joanna is a grandmother of two, who has been married for 26 years to conductor Stephen Barlow.She has previously expressed her admiration for her younger co-star, telling Contact Music: ‘Leonardo DiCaprio is enchanting.’He’s professional and kind and courteous. Everyone loves him and he’s not remotely a big starry star.’With Martin Scorsese at the helm the film looks set to be another hit for DiCaprio.

Offset DiCaprio is back on the dating market after his split from a 23-year-old underwear model.He appears is in no hurry to give up the single life, having dated a string of gorgeous women, including actress Blake Lively and models Bar Refaeli and Gisele Bundchen.Last week he split from Victoria’s Secret model Erin Heatherton amidst reports he wasn’t ready to settle downA source told the New York Post’s Page Six: ‘Erin wanted things to get more serious between them, but Leo is not ready to settle down.

‘While it would seem amazing that he wouldn’t want to settle down with one of the world’s most beautiful women, Leo leads a charmed life.’Meanwhile DiCaprio takes the cover of this month’s Details magazine, as it celebrates ‘the innovators, risk-takers and big thinkers who are changing the face of entertainment’.Of his upcoming movies, he calls The Wolf of Wall Street a ‘really wild, nuts movie’ and his character in Django Unchained as ‘one of, if not the most, despicable, indulgent, radical characters I’ve ever read in my life’. – Dailymail