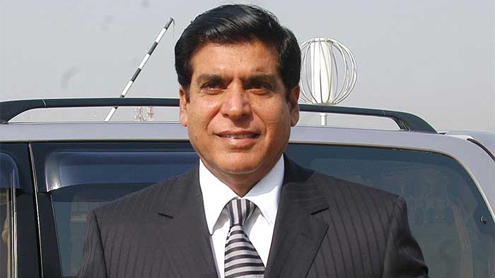 The PM pointed to the anomaly in our history that military dictators had remained in power for ten years at a time but no one stopped them from their unconstitutional actions, while the present elected government has been unnecessarily targeted. He asked the opposition parties to come forward for holding free, fair and transparent elections, this being the only process through which politicians could come to power. No effort should be made to destabilise the government, the PM argued, as there was a crying need for collective efforts to steer the country out of crisis. That is why, the PM continued, a consensus Chief Election Commissioner has been appointed because “we do not want any hanky panky in the polling process”.

He then went on to discuss the energy crisis, arguing that increased hydropower generation promised the best solution for the country’s energy deficit. He reminded his audience that late prime minister Benazir Bhutto was criticised when she initiated the Independent Power Producers (IPPs) concept in her second term, a policy that clearly has proved its worth with the passage of time and prevented an even worse energy crisis by now. Apart from the Neelum-Jehlum, Dober, Kohala and Dasu hydropower projects, the government has also started work on Thar coal, the PM revealed.

It must be conceded that the past four and a half years of an elected PPP-led coalition government have been some of the toughest for any elected government in our history. Not only has the government been under pressure if not siege from the cast of usual suspects, including the military and an overly assertive judiciary, the opposition has blown hot and cold in terms of cooperation with, and also stubborn resistance to, the present dispensation. The challenges faced by any government taking over after the traumatic assassination of Benazir Bhutto and the depredations left behind as a legacy by the Musharraf dictatorship would have tested the most resolute of political leaderships. The PM referred to the constant predictions of the fall of the government every other day, prognoses that were proved wrong over time. While this offers temptation to the government to play the ‘victim card’, and there may be weight in that contention, ultimately any government’s tenure is judged on the basis of its performance and delivery.

While there is dissatisfaction on that count in the public, particularly over energy, the thrust of the right wing opposition inside and outside parliament has focused almost exclusively on the alleged corruption of the government and its leaders. No substantive evidence has been produced to back up this barrage of accusations, the public being primed by the media and opposition to believe the worst about this government and offer it no slack. Corruption is a red herring since no one can claim the moral high ground across the board in our present polity. Therefore the focus on corruption almost exclusively, is unlikely to yield any positive outcome, except for retaliatory accusations against each other, reducing the credibility of the political class as a whole with no solution. Arguably, those desirous of rooting out corruption from our system, if they are not indulging n mere point scoring and are sincere, should realise that only continuity of the democratic system can offer any hope of improvement of a cancer that has afflicted the sinews of state and society in every nook and cranny.

Only persisting with democracy offers hope of betterment, cleansing of these Augean stables of corruption, and evolving in the direction of a better leadership.The speculation about an August 14 announcement of early elections in November, provided it carries the consensus of the parties across the board, may be a welcome relief from the present state of tension and crisis. Given Maulana Fazlur Rehman’s warning that the disqualification of another PM may derail democracy, perhaps sit is time for the Supreme Court to stay its hand and leave the fate of this government in the hands of the people through the ballot box.-Dailytimes