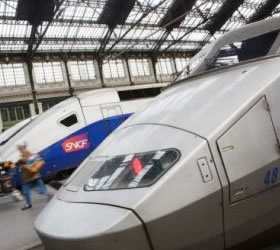 French TGV trains will cross the Pyrenees for the first time after a new high-speed rail line to Figueras was opened for business on Sunday.The 44 km stretch of new line for the moment extends only as far as Figueras, just south of the border from the French city of Perpignan.Spain uses a different gauge system to France and the line is still being extended to Barcelona. It should be completed by early 2013.When it is finished, passengers will be able to go from Paris to the Catalan capital in 5.30 hours.Until then, the journey will take 7.20 hours because of the change at Figueras, although that is still some two hours faster than before.French and Spanish rail authorities estimate that by 2020 the journey time from Paris to Barcelona will be 4.30 hours as improvements are made to the existing high-speed lines in south-west France.The passenger service will be run jointly by French operator SNCF and its Spanish counterpart Renfe.Freight trains will begin to use the new line as of next week. The inauguration of the route for TGV passenger services is scheduled for mid-January – French24